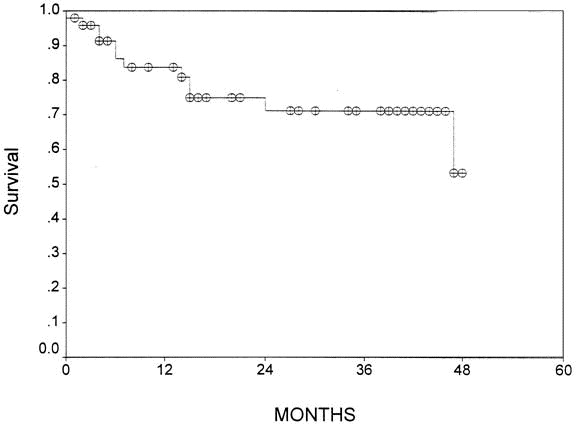 Between June 1993 and June 1997, 48 consecutive, nonrandomized patients at the University of Michigan Medical Center, with end-stage dilated cardiomyopathy and refractory severe MR, were studied prospectively. All patients had New York Heart Association (NYHA) class III or IV congestive heart failure despite receiving maximized medical regimens and had severe LV systolic dysfunction defined as an ejection fraction less than 25% on angiography or radionuclide studies. Patients were excluded from this study if there was evidence of primary mitral valvular disease, if significant MR preceded cardiomyopathy, if surgical intervention included revascularization of viable myocardium, or if there was significant aortic insufficiency.
MR was assessed by means of color-flow Doppler ultrasonography; severity was graded as mild, moderate, or severe. Quantitative analysis was performed by a single experienced echocardiographer blinded to clinical data. Measurements of LV, mitral annular, and outflow tract diameters were made from two-dimensional images. LV volumes, stroke volume, flows, regurgitant fractions, and ejection fraction were calculated as previously described.
4
Early outcome of mitral valve reconstruction in patients with end-stage cardiomyopathy.
J Thorac Cardiovasc Surg. 1995; 4: 676-683
Intraoperative and postoperative mitral gradients were calculated by means of continuous wave Doppler ultrasonography.
Mitral valve reconstruction was performed through a median sternotomy with standard cardiopulmonary bypass and hypothermic blood cardioplegic arrest in 37 patients and through a right thoracotomy with cold fibrillatory arrest in 11 patients who had prior coronary bypass grafting. Operations were performed with institutional approval and informed consent.
All patients were contacted by telephone and personal office visit for follow-up. A standardized questionnaire was used for symptomatic evaluation, with physical activity being quantitated by self-report and compared with preoperative functional status. The patients' personal physicians were also contacted in follow-up. Echocardiographic follow-up studies were generally performed at the University of Michigan. In the case of echocardiograms performed elsewhere, original videotapes were sent for quantitative analysis at the University of Michigan. All data are presented as mean ± standard deviation. Comparisons between preoperative and postoperative maximum volume of oxygen use, NYHA class, LV size, volume, ejection fraction, regurgitant fraction, and forward cardiac output were made by means of paired Student's t tests. Survival analysis was performed by the Kaplan-Meier method. A significance level of 5% was used when comparing differences.

Forty-eight patients (31 men) were included in the study. Their ages ranged from 33 to 79 years (mean 63 ± 6 years). Twenty patients were over the age of 65 years. Twenty-four patients had nonischemic dilated cardiomyopathy, and 24 had end-stage ischemic cardiomyopathy, without ongoing ischemia, as defined by negative dobutamine echocardiographic functional testing and/or negative positron emission tomography scanning for viability. No patient was believed to have an acute myopathy. Preoperatively, 40 patients had NYHA class IV congestive heart failure and eight had class III. The mean duration of documented cardiomyopathy or symptomatic congestive heart failure was 46 years (range 0 to 16 years). In the year before the operation, these patients had up to nine hospital admissions for congestive heart failure. All patients were receiving maximized medical therapy for congestive heart failure including digoxin, diuretics, and afterload reducers. Afterload reduction was accomplished with angiotensin-converting enzyme inhibitors in all patients, with the addition of either nitroglycerin or hydralazine, as indicated.
Preoperative ejection fraction ranged from 8% to 25% (mean 16% ± 3%). On coronary angiography, seven patients with nonischemic dilated cardiomyopathy were found to have incidental coronary artery disease. All patients with ischemic cardiomyopathy had significant coronary artery disease, with prior coronary artery bypassing, but no ongoing ischemia on functional testing. One patient with ischemic cardiomyopathy had a history of recurrent ventricular tachycardia. Another patient, with nonischemic cardiomyopathy, had hypereosinophilia syndrome and was receiving interferon therapy. This patient was not believed to be a candidate for transplantation.
All patients underwent mitral reconstruction by means of a remodeling ring annuloplasty, with implantation of an undersized flexible remodeling ring. No patient required a complex repair, inasmuch as all patients were believed to have only annular dilation or papillary muscle dysfunction (or both). The average duration of cardiopulmonary bypass was 124 ± 24 minutes (range 66 to 198 minutes), with an aortic crossclamp time of 71 ± 11 minutes (range 51 to 123 minutes). None of the patients entered in this study had irreparable heart disease. Coronary artery bypass grafts were placed in seven patients with incidental coronary artery disease. Additional procedures included De Vega tricuspid annuloplasty in 11 patients, closure of an atrial septal defect and a patent foramen ovale in 12, and placement of implantable cardioverter-defibrillator patches in one patient.
One operative death from right ventricular failure occurred in a patient who died despite use of both an intraaortic balloon pump and mechanical support with a right ventricular assist device. All other patients survived the mitral reconstruction procedure, despite their poor preoperative ventricular function. All patients were weaned from cardiopulmonary bypass with the use of a phosphodiesterase inhibitor and norepinephrine. One patient required support with an intraaortic balloon pump for 2 days. Intraoperative transesophageal echocardiography after annuloplasty and the discontinuation of cardiopulmonary bypass revealed no MR in 41 patients and trivial to mild MR in seven. The mean transmitral gradient by intraoperative transesophageal echocardiography was 31 mm Hg (range 2 to 6 mm Hg). Postoperatively, seven patients required longer than 24 hours of mechanical ventilator support after mitral reconstruction, but only three patients required longer than 48 hours. There was one late wound infection. No in-hospital deaths occurred, other than the one previously described, and the mean duration of hospitalization after the operation was 9 ± 4 days (range 5 to 37 days).
Follow-up was available for all patients. The duration of follow-up in these patients has been 1 to 48 months, with 1- and 2-year survivals of 82% and 72%. At a mean follow-up of 22 months, all remaining patients are in NYHA class I or II, with a mean postoperative ejection fraction of 26% and a significant increase over the preoperative ejection fraction in every patient and in the group as a whole. All patients have continued to receive medical therapy for congestive heart failure. Paradoxically, many patients have had their afterload reduction medication increased, because they are now able to tolerate higher doses of angiotensin-converting enzyme inhibitors. All patients have remained in their preoperative rhythm. All patients reported subjective improvement in their functional status after the operation, citing activities routinely performed after the operation for which exertional dyspnea was previously prohibitive. The NYHA failure class significantly fell for every patient individually and from a mean of 3.9 ± 0.2 to 1.8 ± 0.4 for the entire group. In patients in whom a preoperative comparison was available, peak maximal volume of oxygen use during exercise rose significantly from a mean of 14.5 to 18.6 ml oxygen per kilogram per minute.
Table IMatched preoperative and 24-month postoperative echocardiographic measurements to compare preoperative and intermediate-term LV end-diastolic volume (EDV), sphericity (diameter/length, D/L), ejection fraction (EF), forward cardiac output (CO), and regurgitant fraction (RF)
There have been 10 late deaths in this group after mitral valve reconstruction. Two late deaths were related to complications developing after other operative procedures—emergency appendectomy and cholecystectomy. Other deaths have resulted from continued heart failure, suicide, and sudden ventricular arrhythmia.

☆From the Sections of Thoracic Surgery and Cardiology, The University of Michigan, Ann Arbor, Mich.