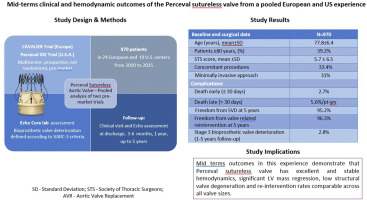 This paper is only available as a PDF. To read, Please Download here.

Data was obtained from a multicenter European and a U.S. IDE trials. Echocardiography data were analyzed by an echocardiography core lab. Mixed-effects regression model assessed relationship between hemodynamic outcomes, time from procedure and valve sizes. VARC-3 definition for bioprosthetic valve failure was applied.

The sutureless valve was implanted in 970 patients. The median age was 77.8 years, 57.2% of the patients were female, the median Society of Thoracic Surgeons predicated risk of mortality (STS PROM) was 3.3% [2.1; 6.2], and 33.4 % had concomitant procedures. Median clinical follow-up was 45.7 months [28.2; 76.1]. Small (S) and medium (M) valve sizes were implanted more commonly in women (16.9% versus 1.9% for S and 55.1% versus 19.5% for M, p<0.001). The mean aortic valve gradients decreased significantly post implant and remained stable across all valve sizes throughout the follow up period. All patients were free from severe patient prosthesis mismatch (with EOA/m2 of > 0.8). Significant left ventricular mass regression was documented regardless valve sizes, plateaued at - 9.1% at 5-years. Freedom from structural valve deterioration and reintervention were 95.2% and 96.3% at 5-years and were independent of implanted valve size (p=0.22). VARC-3 Stage 3 bioprosthetic valve failure rate was low, 2.8% at 5 years.

Gabriel S. Aldea: nothing to disclose

Christopher R. Burke: nothing to disclose

David A. Heimansohn: nothing to disclose

Axel Haverich: nothing to disclose

Rakesh M. Suri: nothing to disclose

Funding: The CAVALIER trial and the PERCEVAL IDE Trial were funded by CORCYM S.r.l.

Perceval valve showed low and stable gradients at 5-year follow-up with low rates of bioprosthesis degeneration and reintervention across all valve sizes.

© 2023 Published by Elsevier Inc. on behalf of The American Association for Thoracic Surgery