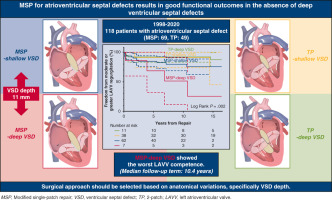 This retrospective study included 118 patients with complete atrioventricular septal defects who underwent intracardiac repair from 1998 to 2020 (MSP: 69; TP: 49). The median follow-up period was 10.4 years. The functional outcome of freedom from moderate or greater LAVV regurgitation (LAVVR) was estimated using the Kaplan–Meier method.

The hospital mortality was 1.7% (2/118) and late mortality was 0.8% (1/118). Eight patients required LAVV-related reoperation (MSP: 4; TP: 4) and none required left ventricular outflow tract-related reoperation. In the MSP group without LAVV anomaly, the receiver operating characteristic curve analysis revealed that the ventricular septal defect (VSD) depth was strongly associated with moderate or greater postoperative LAVVR, with the best cutoff at 10.9 mm. When stratified according to the combination of intracardiac repair type and VSD depth, the MSP-deep VSD (VSD depth >11 mm) group showed the worst LAVV competence among the 4 groups (P = .002). According to multivariate analysis, weight <4.0 kg, LAVV anomaly, and moderate or greater preoperative LAVVR were independent risk factors for moderate or greater postoperative LAVVR, whereas MSP was not a risk factor.

Postoperative LAVVR remains an obstacle to improved functional outcomes. MSP provides LAVV competence similar to TP unless deep VSD is present. The surgical approach should be selected on the basis of anatomical variations, specifically VSD depth.

This retrospective, nonrandomized, single-institution study included 118 patients with balanced CAVSD who underwent ICR at Okayama University Hospital between June 1998 and September 2020; 69 patients underwent MSP whereas 49 underwent TP. Patients with an associated diagnosis of tetralogy of Fallot or single papillary muscle were excluded. Our hospital's institutional review board approved this study, and the requirement for written informed consent was waived because of its observational nature (approval number 2009-023; approval date: October 23, 2020). A thorough retrospective review of the medical records was conducted. Preoperative, intraoperative, postoperative (before discharge), and follow-up data were collected from clinical reports.

The primary end points were survival, reoperation related to LAVVR, and moderate or greater postoperative LAVVR measured using echocardiography. All recordings of 2-dimensional, M-mode, and Doppler images were repeatedly obtained by a few cardiologists specializing in echocardiography in conformance with the recommendations of the American Society of Echocardiography guidelines, and Z scores were generated.
9
Recommendations for quantification methods during the performance of a pediatric echocardiogram: a report from the Pediatric Measurements Writing Group of the American Society of Echocardiography Pediatric and Congenital Heart Disease Council.
J Am Soc Echocardiogr. 2010; 23: 465-495
Left ventricular end-diastolic diameter was measured during diastole in the parasternal short-axis view. The VSD depth was defined as the distance between the ventricular crest and the closed atrioventricular valvular leaflets during diastole in the 4-chamber view. The VSD depth index was calculated and divided by the body surface area.
Mechanical ventilatory support was defined as a preoperative need for intubation. LAVV anomaly was defined as the presence of a double orifice LAVV, significant deficient lateral leaflet, or dysplastic leaflet.
10
The presence of Down syndrome is not a risk factor in complete atrioventricular septal defect repair.
J Thorac Cardiovasc Surg. 2007; 134: 304-310

Criteria for primary ICR included body weight >4 kg, no association with other cardiac anomalies, and no preoperative shock or other organ dysfunction; otherwise, pulmonary artery banding (PAB) was performed as the first palliation in symptomatic neonates or early infants who had large VSD leading to secondary LAVVR and congestive heart failure. These palliated patients were enrolled on the waiting list when their body weight exceeded 4 kg. All ICRs were performed via a median sternotomy with aortobicaval cannulation and moderate hypothermia. TP was performed exclusively by 1 surgeon (S.S.) until MSP was first introduced at our institution in 2002; thereafter, both techniques have been performed by 2 surgeons (S.S. and S.K.). The decision regarding the surgical technique was made by the professor of cardiovascular surgery in a multidisciplinary meeting, which included cardiologists, and was mostly determined by the presence of outlet extension VSD rather than VSD depth. The decision made was not reversed during the operation. MSP (Video 1) involved direct closure of the VSD component using multiple interrupted mattress sutures placed on the right side of the interventricular crest, passed through the bridging leaflets, whose division line had a slight shift to the right side, through the autologous pericardial patch that was to close the atrial septal defect, and through a thin felt strip. After these sutures were tied, the zone of apposition between the superior and inferior bridging leaflets in the LAVV was approximated with multiple interrupted simple sutures up to the point where the chordae inserted on the valve leaflet, unless this would have led to LAVV stenosis. The remainder of the pericardial patch was used to close the primum atrial septal defect while the coronary sinus was kept draining into the right atrium. The apposition zone in the right atrioventricular valve was also closed with 1 or 2 interrupted simple sutures. In TP, the VSD component was closed with a Dacron (DuPont de Nemours Inc) patch. Then a series of sutures were passed through the free edge of the patch, superior and inferior bridging leaflets, and the autologous pericardial patch and finally tied down. The remaining procedures were the same as for MSP.

Continuous variables are reported as median (IQR) for skewed data or mean (standard deviation) for values with normal distribution. Categorical variables are reported as absolute frequency (percentage). Continuous variables were compared using the t test or Mann–Whitney U test on the basis of the normality of the data. Categorical variables were compared using Pearson χ2 test. In cases in which the expected frequency was <5, Fisher’ exact test was used. Receiver operating characteristic (ROC) curves were calculated to determine the best cutoff value of VSD depth for moderate or greater postoperative LAVVR. Accuracy was measured according to the area under the ROC curve. A multivariate Cox proportional hazards regression model was used to determine the independent risk factors of moderate or greater postoperative LAVVR, with a backward elimination strategy, beginning with a baseline model including all variables in univariate analysis with a value of P <.05. Variables were subsequently removed one by one according to P value (highest to lowest), to only include risk factors with a value of P <.05 in the final model. The hazard ratios and 95% confidence intervals (CIs) are reported for multivariate risk factors with a value of P <.05. Estimates of survival, freedom from reoperation, and moderate or greater LAVVR were made using the Kaplan–Meier method. Censoring was performed at the time of the last follow-up or death. All statistical analyses were performed with SPSS version 28 (IBM Corp) and GraphPad Prism software version 9 (GraphPad Software Inc).

Median age and weight at ICR were 176 (IQR, 123-330) days and 5.3 (IQR, 4.2-6.5) kg, respectively. Twenty-one (18%) patients weighed <4.0 kg. Thirty-nine (33%) patients underwent initial PAB for palliation. The characteristics of the patients who underwent MSP and TP were compared (Table 1). Age and weight at ICR were not different between the 2 groups. Trisomy 21 and Rastelli type C anatomy were more common in the TP group. Preoperative echocardiography before ICR showed that VSD depth in the MSP group was less than that in the TP group. The VSD depth index in the MSP group was also less than that in the TP group. Associated LAVV anomalies presented more often in the MSP group. The left ventricular dimension and proportion of patients with moderate or greater LAVVR were mostly equivalent between the 2 groups.
Table 1Patient demographic characteristics
Data are presented as median (interquartile range) or n (%) or mean (±SD). ICR, Intracardiac repair; VSD, ventricular septal defect; LVEDD, left ventricular end-diastolic diameter; LAVVR, left atrioventricular valve regurgitation; LAVV, left atrioventricular valve.

Functional Outcomes in the MSP and TP Groups

Type of Procedure and Effect of VSD Depth on Late LAVVR

Considering the current emphasis on better functional outcomes, our study showed excellent surgical outcomes of balanced CAVSD with a low overall mortality rate (2.5%; 3/118), infrequent reoperation related to LAVVR (6.7%; 8/118), and a low proportion of moderate or greater postoperative LAVVR (23%; 27/118) during a postoperative follow-up period of 20 years. Identified risk factors for later LAVV incompetence in the whole cohort did not involve MSP. Further, the VSD depth in the MSP group had a strong association with unfavorable valve competence on ROC analysis. At first glance, the functional outcome of TP appears to be superior to MSP; however, when stratified according to the combination of ICR type and VSD depth, only the MSP for the deep VSD group showed the stepwise decline of functional outcome, whereas the other 3 groups showed durable LAVV competence (Figure 5; Video Abstract). This implied that the functional outcomes were comparable between the groups if the VSD was relatively shallow (VSD depth ≤11 mm). These findings indicate that specific anatomy should be taken into consideration when choosing the surgical technique.

Postoperative LAVVR and Its Risk Factors

This study has the typical limitations of any retrospective study: selection bias and lack of randomization. It was only on the basis of the data available with a few events, it is not possible to ascertain if the variables that were not included in the multivariate analysis affected the findings. Although all echocardiography had been performed by a few cardiologists specializing in echocardiography, no core labs or examiners reviewed the echocardiographic data in this study. Hence, echocardiography data might be dependent on the skills of the reader. The follow-up length was shorter in the MSP group, which might be insufficient to detect a significant difference between the 2 groups.

Postoperative LAVVR is still an obstacle to better functional outcomes and quality of life. Unless VSD is deep, MSP and TP provide similar LAVV competence. The appropriate surgical approach should be selected according to the patient's anatomy, specifically VSD depth.

You can watch a Webcast of this AATS meeting presentation by going to: https://www.aats.org/resources/1488.

© 2022 by The American Association for Thoracic Surgery