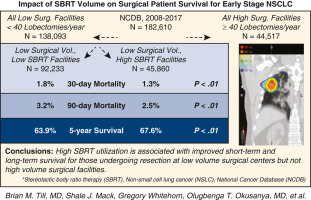 Stereotactic body radiation therapy (SBRT) is increasingly used to treat non–small cell lung cancer. The purpose of this study is to analyze relationships between facility SBRT utilization and surgical patient selection and survival after surgery.

In total, 182,610 patients were included. Proportion of high SBRT:surgery ratio (≥17%) facilities increased from 118 (11.5%) to 558 (48.4%) over the study period. Patients undergoing surgery at high-SBRT facilities had comparable comorbidity scores and tumor sizes to those at low-SBRT facilities, and nonclinically significant differences in age, race, and insurance status. Among low-volume surgical facilities, treatment at a high SBRT-using facility was associated with decreased 30-day mortality (1.8% vs 1.4%, P < .001) and 90-day mortality (3.3% vs 2.6%, P < .001). At high-volume surgical facilities, no difference was observed. At 5 years, a survival advantage was identified for patients undergoing resection at facilities with high surgical volumes (hazard ratio, 0.91; confidence interval, 0.90-0.93 P < .001) but not at high SBRT-utilizing facilities.

We performed a retrospective review of the National Cancer Database (NCDB) for the years 2008 to 2017. The NCDB is a joint project of the Commission on Cancer of the American College of Surgeons and the American Cancer Society. This dataset captures 70% of all newly diagnosed cancers in the United States annually reported from approximately 1500 hospitals with Commission on Cancer–accredited cancer programs. The NCDB pathologic staging is classified using the current edition at the time of diagnosis of the American Joint Commission on Cancer staging guidelines, based on the tumor size and/or extension, regional lymph node metastases, and distant metastases upon clinical examination. The American College of Surgeons and the Commission on Cancer have not verified and are not responsible for the analysis or conclusions drawn from this study. This project was deemed exempt from the institutional review board at Thomas Jefferson University (PRC#: 2020-117A, September 7, 2021).
All patients 18 years of age or older with clinical T1 or T2 N0M0 lesions were considered for inclusion. Patients treated with neoadjuvant therapy were excluded from the analysis; patients with preoperative cytology or histology consistent with carcinoid tumor were further excluded. Patients with additional malignancies and unknown survival were also excluded from this study. Patient specific data on age, sex, race, median income, Charlson–Deyo Comorbidity Index (CCI) score, and median tumor size was abstracted. Abstracted facility-level data included hospital type and geographic setting. Finally, clinical outcomes including hospital length of stay, readmission, tumor histology, 30-day surgical mortality, 90-day surgical mortality, and 5-year survival status were abstracted.

Data were analyzed with respect to facility volume. We utilized the SBRT:surgery volume ratio previously identified by Syed and colleagues.
6
Surgical outcomes for early stage non-small cell lung cancer at facilities with stereotactic body radiation therapy programs.
Chest. 2022; 161: 833-844
Facilities performing greater than or equal to an SBRT:surgery ratio of ≥17% in a given year were designated as high SBRT facilities based on the previously identified survival advantage. Hospitals performing ≥40 lobectomies per year were designated high-volume facilities based on previous analyses,
15
The influence of hospital volume on survival after resection for lung cancer.
N Engl J Med. 2001; 345: 181-188
,
16
Surgery in high-volume hospitals not commission on cancer accreditation leads to increased cancer-specific survival for early-stage lung cancer.
Am J Surg. 2015; 210: 643-647
,
17
Does one size fit all? An evaluation of the 2018 Leapfrog Group minimal hospital and surgeon volume thresholds for lung surgery.
J Thorac Cardiovasc Surg. 2020; 159: 2071-2079.e2
and those performing fewer were designated as low-volume operative facilities. For these calculations, per annuum facility volume was calculated using data from the full NCDB.

This analysis has demonstrated the rapid expansion of SBRT utilization since 2008 for the treatment of early-stage NSCLC. It has identified an association between facility SBRT- utilization and short-term and long-term survival following surgical resection. These differences appear isolated to patients undergoing resection at low-volume surgical facilities, as neither an association between SBRT-utilization and short-term nor long-term survival was identified for those undergoing operation at high-volume surgical facilities.
This analysis was intended to redemonstrate the previously identified survival benefit presented by Syed and colleagues with consideration for patient-level factors that may influence survival, and while utilizing of a previously established facility-level surgical volume threshold associated with mortality benefit. Second, we sought to investigate long-term survival after resection. Regarding patient selection, there are several ways in which the presence or absence of SBRT as a treatment option may impact patient and provider decision-making regarding surgical care, thereby impacting patient demographics. First, there is the possibility of a purification effect, whereby poor operative candidates are consciously or subconsciously directed toward SBRT therapy over surgical resection. In theory, the effect of such a trend would be most pronounced at those facilities that perform a low volume of surgical resection and have a proportionally higher utilization of SBRT. In this analysis, we have not found clinically significant differences between this cohort and others in terms of patient age, comorbidity profile, tumor size, or income (Table 2). Second, there is a possibility that at low-volume surgical facilities, the addition of SBRT programs has driven providers to offer surgery to poorer surgical candidates than may have otherwise been considered for operative management. Comparing comorbidity scores, this effect would most likely be seen at low surgical volume facilities with proportionally greater utilization of SBRT. We have seen no evidence of this trend in our analysis, either. More data are needed, particularly regarding patient functional status, pulmonary function testing, and frailty, to better understand the relationship between the availability of SBRT treatment and implications for changes in the demographics of those patients undergoing surgical resection.
Regarding surgical volume, our results differ from the previous analysis. We find that the effect size of surgical volume on both measures of short-term surgical mortality is larger than that observed for SBRT-volume: H-SBRT: OR, 0.91 (CI, 0.83-0.99), P = .027 versus H-Surg: OR, 0.82 (CI, 0.74-0.91), P < .001 (30-day mortality). This differs from the previous analysis, which found only top quartile surgical volume (>85 procedures per year) significantly impacted 30-day surgical mortality: OR, 0.78 (CI, 0.69-0.88), P < .001, and 90-day surgical mortality: OR, 0.82 (CI, 0.75-0.89), P < .001, and found comparable associations in survival benefit observed for H-SBRT: OR, 0.80 (CI, 0.73-0.88), P < .001 and H-Surg: OR, 0.78 (CI, 0.69-0.88), P < .001. The reason for these different findings is unclear, and further study is needed. Of note, our analysis did not include facilities with no SBRT program, as we believe incorporating these hospitals into the analysis confounds the central question of how SBRT programs impact patient selection and outcomes. In our analysis, the effect size of facility type, insurance status, and patient comorbidity profile were each larger than that observed for facility SBRT-utilization on short-term mortality.
Together, the observed differences in short-term and long-term mortality, coupled with nonclinically significant differences observed in patient demographics, suggest that high SBRT-utilization may serve as a proxy for other important facility-level characteristics impacting short-term and long-term mortality for patients rather than influencing outcomes by altering patient selection for surgery. More granular detail on baseline patient demographics and functional status is needed to further test this hypothesis.
There are several notable limitations to this study. First, the data used in the analysis are derived from a deidentified NCDB files. Because of the retrospective nature of the data utilized in this analysis, selection bias cannot be discounted. Another limitation is the lack of granularity surrounding physician and provider decision-making surrounding choices of type of treatment. Further study is needed surrounding the issue of shared clinician and patient decision-making regarding the use of SBRT as opposed to surgical treatment. Finally, stratifying facility volume by the 17% SBRT:surgery ratio cutoff may miss other important inflection points in the interaction between these treatment modalities, and further analysis is needed to fully establish the relationship between these services and surgical outcomes.
In conclusion, we present an analysis of the relationship between SBRT utilization and surgical volume on surgical survival in the setting of early NSCLC. This study has demonstrated that for surgical care at facilities with low surgical volume, SBRT utilization is associated with differences in short-term and long-term morality. Further study is needed to evaluate the relationship between expanding SBRT programs, surgical patient selection, and mortality.

© 2022 by The American Association for Thoracic Surgery