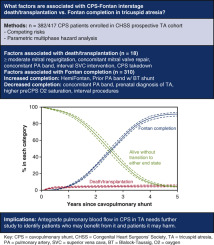 Factors associated with mortality or transplantation versus Fontan completion after cavopulmonary shunt for patients with tricuspid atresia
Previous ArticleCommentary: Total anomalous pulmonary venous connection, heterotaxy and pulmonary vein obstruction: The relentless pursuit of imperfection
Next ArticleCommentary: Will the next improvement in the care of single ventricle patients come from focusing on patient selection for the cavopulmonary shunt?

Tricuspid atresia with normally related great vessels (TA) is considered the optimal substrate for the Fontan pathway. The factors associated with death or transplantation after cavopulmonary shunt (CPS) are underappreciated. We aimed to determine factors associated with CPS–Fontan interstage death/transplantation versus transition to Fontan in TA.

A total of 417 infants younger than 3 months of age with TA were enrolled (January 1999 to February 2020) from 40 institutions into the Congenital Heart Surgeons' Society TA cohort. Parametric competing risk methodology was used to determine factors associated with the competing end points of death/transplantation without Fontan completion, and transition to Fontan.

The mortality rate after CPS in patients with TA is notable. Those with preoperative mitral valve regurgitation remain a high-risk group. PAB at the time of CPS being associated with both increased risk of death and decreased Fontan completion may represent a deleterious effect of antegrade pulmonary blood flow in the CPS circulation.

List of members of the working group can be found in Table E1.

© 2021 by The American Association for Thoracic Surgery