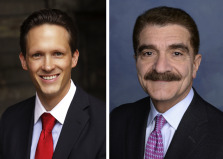 Central Message
Ensuring optimal medical therapy through a team approach will improve the long-term outcomes of patients with ischemic heart disease undergoing coronary artery bypass grafting.
See Article page 1890.
Ischemic cardiomyopathy (ICM) is a leading cause of morbidity and mortality across the globe, with a rapidly growing number of affected patients in the US and a poor prognosis overall.
1
Heart disease and stroke statistics—2019 update: a report from the American Heart Association.
Circulation. 2019; 139: e56-e528
Median survival is not substantially greater than 5 years in patients with ICM and reduced ejection fraction (EF).
2
Coronary-artery bypass surgery in patients with ischemic cardiomyopathy.
N Engl J Med. 2016; 374: 1511-1520
Although primary prevention of coronary artery disease (CAD) is the sole hope of effectively lessening the societal burden of this disease, effective secondary prevention can preserve some quality and quantity of life in patients diagnosed with ICM.
Surgical and percutaneous revascularization have prolonged and improved the lives of millions of patients with CAD and ICM over the last 40-plus years; however, the therapeutic effectiveness of myocardial revascularization has increased in only limited increments despite advances in technology and technique. Yet survival of patients with ICM has continued to increase, attributable in large part to the progress made in the medical management of CAD and ICM.
In this edition of the Journal, Farsky and colleagues
3
Optimal medical therapy with or without surgical revascularization and long-term outcomes in ischemic cardiomyopathy.
J Thorac Cardiovasc Surg. 2022; 164: 1890-1899.e4
report a post hoc analysis of the 10-year data from the prospective randomized Surgical Treatment for Ischemic Cardiomyopathy (STICH) trial. They compare optimal medical therapy (OMT) with non-OMT in both arms of the trial (coronary artery bypass grafting [CABG] + medication and medication alone). Using an a priori definition of OMT and patient self-reported data on drug compliance, they show a substantial benefit of OMT over non-OMT in both arms of the trial that enrolled patients with an EF <35%.
The original publication of the 10-year STICH data
2
Coronary-artery bypass surgery in patients with ischemic cardiomyopathy.
N Engl J Med. 2016; 374: 1511-1520
showed an absolute mortality reduction of 7.2% with CABG over medical management alone for a number needed to treat of 14. The absolute mortality reduction in this study, comparing the worst of both worlds (ie, non-OMT alone) to the best of both worlds (CABG + OMT) was 17%, cutting the NNT down to 6.
These findings are not necessarily surprising, but they dramatically show the importance of OMT in this vulnerable patient population. Trials of long-acting beta-blockers (CAPRICORN,
4
Effect of catvedilol on outcome after myocardial infarction in patients with left-ventricular dysfunction: the CAPRICORN randomized trial.
Lancet. 2001; 357: 1385-1390
MERIT-HF
5
Effect of metoprolol CR/XL in chronic heart failure: metoprolol CR/XL randomized intervention trial in congestive heart failure (MEERIT-HF).
Lancet. 1999; 353: 2001-2007
), angiotensin-converting enzyme inhibitors (TRACE,
6
A clinical trial of the angiotensin-converting-enzyme inhibitor trandolapril in patients with left ventricular dysfunction after myocardial infarction. Trandolapril Cardiac Evaluation (TRACE) study Group.
N Engl J Med. 1995; 333: 1670-1676
SAVE,
7
Effect of captopril on mortality and morbidity in patients with left ventricular dysfunction after myodardial infarction: results of the survival and ventricular enlargement trial.
N Engl J Med. 1992; 327: 669-677
AIRE
8
Effect of ramipril on mortality and morbidity of survivors of acute myocardial infarction with clinical evidence of heart failure.
Lancet. 1993; 342: 821-828
), angiotensin receptor blockers (VALIANT
9
Valsartan, captopril, or both in myocardial infarction complicated by heart failure, left ventricular dysfunction, or both (VALIANT trial).
N Engl J Med. 2003; 349: 1893-1906
), mineralocorticoid receptor antagonists (EPHESUS
10
The EPHESUS trial: eplerenon in patients with heart failure due to systolic dysfunction complicating acute myocardal infarction.
Cardiovasc Drugs Ther. 2001; 15: 79-87
), and angiotensin receptor neprilysin inhibitor (PARADIGM-HF
11
Angiotensin-neprilysin inhibition versus enalapril in heart failure: PARADIGM-HF.
N Engl J Med. 2014; 371: 993-1004
) have shown significantly improved survival in patients with heart failure with reduced EF and are an integral part of guideline-directed medical therapy.
12
Medical therapy for heart failure caused by ischemic heart disease.
Circ Res. 2019; 124: 1520-1535
CABG, although improving myocardial blood supply and potentially preventing future myocardial infarction, is ultimately limited in its ability to remodel the left ventricle, reduce wall tension, and improve systolic and diastolic function in ICM. Unfortunately, adherence to even simpler medicine regiments in patients with normal EF undergoing CABG is notoriously poor.
13
Compliance with guideline-directed medical therapy in contemporary coronary revascularization trials.
J Am Coll Cardiol. 2018; 71: 591-602
Few important lessons should be taken away from this study: (1) many patients are receiving suboptimal medical therapy (at baseline), and we must do better both before and after CABG; (2) improving and maintaining drug compliance is hard work but can be done—patient education is key and pays dividends down the road; and (3) physicians and patients alike must understand that CAD and ICM are complex, multifactorial, chronic disease processes, and a band aid will not suffice. A stich in time is part of the solution to improve survival, but it should be shined with sustained OMT.

Disclosures: The authors reported no conflicts of interest.

Published by Elsevier Inc. on behalf of The American Association for Thoracic Surgery