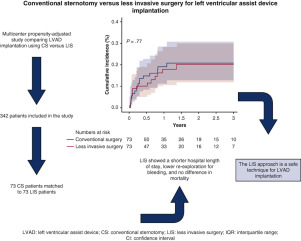 Left ventricular assist device has been shown to be a safe and effective treatment option for patients with end-stage heart failure. However, there is limited evidence showing the effect of the implantation approach on postoperative morbidities and mortality. We aimed to compare left ventricular assist device implantation using conventional sternotomy versus less-invasive surgery including hemi-sternotomy and the minithoracotomy approach.

Between January 2014 and December 2018, a total of 342 consecutive patients underwent LVAD implantation for end-stage heart failure at 2 high-volume institutions. The patients at both centers were discussed in detail with the heart failure team. The majority of the surgical cases were performed by 2 surgeons. The decision to proceed with sternotomy or LIS approach (hemi-sternotomy or minithoracotomy approach) was based on the operating surgeon's discretion. Both surgical techniques were used for the duration of the study, with the CS technique used more commonly in earlier years. Both centers have a restrictive approach for tricuspid valve repair in VAD candidates. Indications and perioperative management of patients with end-stage heart failure were consistent throughout the recruitment period and between managing centers.
Research ethics board approval was obtained from both institutions. Retrospective analysis of prospectively collected data was performed. Patient demographics, preoperative and postoperative risk factors, hemodynamic measurements, perioperative risk factors, and clinical outcomes were analyzed. The Interagency Registry for Mechanically Assisted Circulatory Support (INTERMACS) definitions of right ventricular failure severity were used. Necessity for right ventricular assist device (RVAD) was indicated in acute severe right ventricular failure. The majority of patients had right heart catheterization performed before and after LVAD implantation. Data of the latest right heart catheterization were documented and analyzed. All patients underwent postoperative echocardiography performed by specialized cardiologists. The latest echocardiography performed after LVAD implantation and before discharge was used for analysis. Postoperative right ventricular functional impairment was assessed as mild, moderate, or severe.

The LIS approach was sporadically used early in our experience. However, after the implementation of the procedure, the LIS approach is exclusively used unless aortic valve replacement or patent foramen ovale closure was necessary. The patient was positioned with slight elevation of the left chest. The left ventricular apex was first localized using transthoracic echocardiography. A 4- to 6-cm incision and upper L-shaped hemisternotomy (third intercostal space) was performed (Video 1). The majority of patients underwent operation using a CPB machine (MAQUET AG, Rastatt, Germany). Cannulation was performed under transthoracic echocardiography guidance. For arterial cannulation, the ascending aorta was used, and for venous cannulation, the right femoral vein was used. An anterolateral minithoracotomy was performed, the pericardium was opened, pericardial traction sutures were placed, and the sewing ring was placed on the left ventricular apex under transthoracic echocardiography guidance. CPB was initiated. The apex was incised within the sewing ring using an 11 blade. A coring knife was used for appropriate incisions. The device was inserted into the ventricle and fixed. The driveline was tunneled using the C-Technique.
5
Double tunnel technique for the LVAD driveline: improved management regarding driveline infections.
J Artif Organs. 2012; 15: 44-48
The outflow graft was tunneled within the pericardium and anastomosed end-to-side to the ascending aorta after partial clamping of the ascending aorta. De-airing was performed through the outflow graft and ascending aorta. CPB support was reduced, and the pump was turned on. The pump was covered with a polytetrafluoroethylene membrane, and the pericardium was closed or approximated. The sternum and skin were closed in the usual manner. Notably, a few patients underwent off-pump implantation in this series. The decision to proceed with off-pump implantation was made in the operating room on the basis of the patient's hemodynamic stability. The HeartWare (Medtronic, Framingham, Mass) coring knife was used for all off-pump implantations regardless of the implanted pump. Because of the inability to resterilize the HeartWare coring knifes and increasing use of HeartMate III in the recent years, no off-pump implantation was practiced in the later series. Beating heart, rapid pacing, or adenosine was used at the time of coring for off-pump implantations. The same target activated clotting time was used regardless of whether the procedure was performed on or off-pump.
The postoperative anticoagulation strategy was similar in both centers and included intravenous heparin 24 hours after surgery with target activated partial thromboplastin time of 40-50 seconds. Starting from the third postoperative day, the activated partial thromboplastin time target was 50-60 seconds. Furthermore, every patient received acetylsalicylic acid (100 mg 1-0-0) starting from postoperative day 1. Coumadin was started after removal of the chest tubes and pacing wires.

Categorical variables were reported as counts with percentage and analyzed with chi-square or Fisher exact test whenever appropriate. Continuous study variables were assessed for normal distribution using QQ plots and reported as mean with standard deviation if normally distributed or median with interquartile range (IQR) if not normally distributed. Statistical tests were performed according to normality of data with Welch's t test or Wilcoxon signed-rank test whenever appropriate.
Patients operated using CS approach were compared with patients undergoing LIS approach. Because these 1 groups were unlikely to be similar, a propensity score analysis was computed. Standardized mean differences (SMDs) were calculated for both the unmatched and matched cohorts. For propensity score matching algorithm, we used the nearest neighbor approach using greedy algorithm, caliper size 0.1, without replacement, using a 1:1 ratio, using the R package MatchIt. The following variables were included in the propensity score match based on literature and clinical expertise of the research team: patient age, whether patient was on extracorporeal membrane oxygenation (ECMO) preoperatively, previous cardiac surgery, whether LVAD implantation was performed off-pump, center (Leipzig, Dusseldorf), and model of VAD (HeartWare, HM3). We excluded the HM2 device before performing the matching algorithm because it is not readily used in the thoracotomy approach. Propensity score–matching diagnostics were performed by examining the standardized mean difference (SMD) of covariates in the matched group, comparing the distributional balance of propensity scores between CS and LIS in both unmatched and matched groups using histograms, comparing covariate balance between unmatched and matched groups using a Love plot, and comparing propensity scores of patients using a jitter plot. Diagnostics were performed using the R package cobalt. A sensitivity analysis was performed whereby a multivariable regression model was used to evaluate the effect of the same covariates in the propensity score model including surgical technique using the full unmatched cohort data excluding the HM2 LVAD model.
In addition, we performed time-to-event analyses to compare survival of patients who underwent CS versus LIS. To adjust for the competing risk of heart transplantation, we performed a competing risk regression. We used the Fine and Grey method
6
A proportional hazards model for the subdistribution of a competing risk.
J Am Stat Assoc. 1999; 94: 496-509
using R package cmprsk. which allows for evaluating the association between surgical technique and the time to death while adjusting for the competing risk of heart transplantation. Model coefficients were exponentiated to obtain the subdistribution hazard rate, which is the hazard of death in the presence of competing events. In addition, we designed a cumulative incidence curve for both CS and LIS groups. Patients with missing data were excluded from statistical analysis. Statistical analysis was performed with R (version 3.6.2).

Despite the advantages demonstrated in LIS, it has some limitations. First, LIS is technically more challenging. Specifically, the measurement of the length of the outflow graft may be more difficult. In addition, concomitant procedures, such as valve repair or replacement, may be challenging in the LIS approach. Accordingly, CS remains the gold standard for LVAD implantation in cases where concomitant procedures are required. Notably, considering the possible need of RVAD implantation in patients with LIS, RVAD implantation can be performed safely using the LIS approach.
16
Minimally invasive right ventricular assist device implantation in a patient with Heartware left ventricular assist device.
ASAIO J. 2015; 61: e42-e43
A ProtekDuo cannula (CardiacAssist, Pittsburgh, Pa) can be alternatively used. Some centers tend to use venoarterial ECMO for right ventricle failure in these patients.
Our study has some limitations. First, the analysis of data was conducted retrospectively. However, the majority of data were collected prospectively, which was inputted into a database with standardized variables to be collected. Additionally, this was not a randomized study and the postoperative morbidities were examined using only index hospitalization instead of long-term follow-up. Third, despite matching our surgery groups using several covariates including INTERMACS, there still may be confounding by indication. For instance, the preoperative covariates center, gender, and creatinine had SMDs exceeding 0.1, which suggests imbalance and may influence outcomes. There is also the potential in for unknown covariates to be unbalanced, as is the case in nonrandomized studies. However, we do note that other markers of cardiac function such as cardiac, moderate to severe tricuspid valve insufficiency, central venous pressure, and INTERMACS profile were distribute similarly between groups. We assume that the operative approach and not the differences in the preoperative condition explains the differences in the outcome. The bias confounding by indication was minimized as both centers were subject to strict and similar indications and quality control. Accordingly, the center-level effects on outcomes are likely less influential than the effect of the implantation techniques themselves. Our match algorithm was also not meant to parisominous; we matched for all variables that our research team agreed to be important for patient prognosis after LVAD implantation. Nevertheless, we caution readers to evaluate the covariate balance between our groups when evaluating our outcomes and conclusions. Fourth, in our cohort, data on concomitant procedures were not collected, and the groups were not adjusted according to the concomitant procedures. Therefore, we cannot comment on the potentially effect of concomitant procedures on the need for blood product transfusion and type of blood product transfused during surgery. As previously mentioned, concomitant procedures included in this study period were limited to aortic valve replacement and patent foramen ovale closure. Notably, previous studies have demonstrated that concomitant procedures may increase morality compared with LVAD implantation only.
17
Survival following concomitant aortic valve procedure during left ventricular assist device surgery: an ISHLT Mechanically Assisted Circulatory Support (IMACS) registry analysis.
Eur J Heart Fail. 2020; 22: 1878-1887
,
18
Concomitant aortic valve procedures in patients undergoing implantation of continuous-flow left ventricular assist devices: an INTERMACS database analysis.
J Heart Lung Transplant. 2015; 34: 797-805
Fifth, data were missing in some covariates for the matched and unmatched groups, which suggests the possibility that the similarity between matched groups may vary if patients with missing data were different between surgical technique groups. There was also some missing data in outcomes, resulting in denominators less than the total number of patients in each matched group. For the purpose of transparency and comprehensiveness, we reported these outcomes; however, we add caution when interpreting these outcomes. In addition, we note that intensive care unit length of stay, hospital length of stay, and reexploration for bleeding are at risk of bias due to medical decision. The clinical decisions that resulted in a patient experiencing these outcomes may have been influenced by the LVAD implantation technique. Finally, the cohort of patients are highly selected for these centers, which may limit generalizability. Our centers perform a high volume of surgeries for heart failure. Therefore, the generalizability of these results to other surgical centers may be limited to high-volume centers.

LIS is a safe alternative technique for LVAD implantation. It was associated with a lower reexploration rate for bleeding, shorter intensive care unit length of stay, and shorter length of hospital stay. There was no significant difference in incidence of mortality between these techniques. Randomized trials are necessary to confirm our findings.

© 2020 by The American Association for Thoracic Surgery