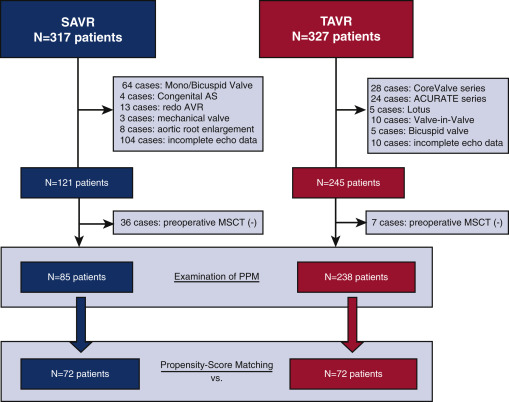 Predicting patient–prosthesis mismatch by aortic root evaluation before aortic valve replacement
Previous ArticleCommentary: Tissue is the issue—Bioprosthetic versus mechanical valves in dialysis-dependent patients
Next ArticleCommentary: When does size matter?

We enrolled 323 patients undergoing SAVR (n = 85) or TAVR (n = 238) for aortic stenosis. The end point was any degree of PPM (effective orifice area index <0.85 cm2/m2). We assessed the predictors of PPM after SAVR or TAVR and compared the incidence of PPM between both arms. Furthermore, we compared the hemodynamic performance using the propensity score matching.

In patients with a small sinotubular junction detected by preoperative computed tomography assessment, the incidence of PPM in patients undergoing SAVR was higher.

The Institutional Review Board of Osaka University (Osaka, Japan) approved this study protocol, and we obtained written informed consent from all the patients before enrollment.
Figure 1 summarizes the patient selection for this study. Between October 2009 and December 2015, 644 consecutive patients with severe aortic stenosis (AS) were treated at our institute with SAVR (317 patients) or TAVR (327 patients). From the SAVR arm, we excluded 64 patients with mono- or bicuspid valves, 4 with congenital AS, 13 undergoing redo-SAVR, 3 with mechanical valves, and 104 with incomplete echocardiographic data at discharge or on postoperative day 7. In addition, we excluded 8 patients with SAVR requiring aortic root enlargement and 36 who did not undergo preoperative MSCT. Conversely, regarding TAVR, we excluded 67 patients treated with CoreValve (Medtronic Inc, Minneapolis, Minn; 28 patients), Acurate (Boston Scientific, Mariborough, Mass; 24 patients), Lotus (Boston Scientific; 5 patients), and valve-in-valve (VinV) procedure (10 patients) because of no permission of data use. Moreover, we excluded 5 patients with a bicuspid valve, 10 with incomplete echocardiographic data, and 7 who did not undergo preoperative MSCT. Finally, we enrolled 323 patients (SAVR, 85 patients; TAVR, 238 patients) in this study. We assessed the predictors of PPM after SAVR or TAVR and compared the incidence of PPM between the SAVR arm and TAVR arm. Furthermore, we used propensity score matching to compare the hemodynamic performance.

SAVR was performed in accordance with the standard surgical practice through midline sternotomy with cardiopulmonary bypass. The oblique aortotomy and transection of the aorta were performed in 98.8% and 1.2%, respectively. Aortic root enlargement was not included in this study. In all patients, bioprostheses were implanted with everting mattress suture with pledget in supra-annular position. On the other hand, regarding TAVR, patients required an agreement that they were ineligible for SAVR because of comorbidities at our heart team's multidisciplinary meetings attended by cardiac surgeons, cardiologists, and anesthesiologists. Before and after reimbursement of Sapien XT in Japan (October 2013), Sapien (THV 9000) and Sapien XT (THV 9300) (Edwards Lifesciences, Irvine, Calif) were implanted. Whereas patients with adequate iliofemoral access underwent TAVR using a Sapien/Sapien XT with Retroflex 3/NovaFlex+ delivery system through a transfemoral approach with standard surgical cut-down of the common femoral artery or common iliac artery, others underwent TAVR with Ascendra/Ascendra+ delivery system by a transapical approach with a mini left-anterior thoracotomy. All the procedures were performed by a heart team comprising cardiac surgeons, cardiologists, and anesthesiologists in a hybrid operating room. Under general anesthesia, balloon aortic valvuloplasty and rapid ventricular pacing were routinely used. Furthermore, TEE was used during the procedures in all cases.

Overall, 323 patients (SAVR, 85 patients; TAVR, 238 patients) underwent an ECG-gated MSCT measurement in this study. The 320-Multidetector Computed Tomography Scanner (Aquilion One; Canon Medical Systems, Tochigi, Japan) was used to perform ECG-gated MSCT preoperatively. All the computed tomography images were assessed by a dedicated workstation with the 3mensio valve software (3mensio Medical Imaging BV, Bilthoven, the Netherlands). After the automated reconstruction and segmentation of the aortic root, the annular plane was identified in a perpendicular short-axis view, defined as the plane connecting the nadirs of all 3 aortic cusps. Next, a polygonal line circumscribing a basal ring was traced to define its perimeter. The annulus diameter was evaluated as ([perimeter of the traced polygon]/π), as described previously at the annular plane in systole.
7
Cross-sectional computed tomographic assessment improves accuracy of aortic annular sizing for transcatheter aortic valve replacement and reduces the incidence of paravalvular aortic regurgitation.
J Am Coll Cardiol. 2012; 59: 1275-1286
We defined the sinus of the Valsalva plane as the plane perpendicular to the center line that exhibits the largest cusp dimensions and evaluated the Valsalva diameter as the mean diameter of 3 sinuses in diastole; the sinotubular (ST) junction plane was defined as the distal end of the sinus portion. Furthermore, we evaluated the ST junction diameter as ([perimeter of the traced polygon]/π) at the ST junction plane in diastole (Figure E1, Figure E2, Figure E3).

In this study, the primary end point was moderate or severe PPM (EOAi <0.85 cm2/m2) because any degree of PPM after SAVR associates with poor long-term results.
1
Incidence and sequelae of prosthesis-patient mismatch in transcatheter versus surgical valve replacement in high-risk patients with severe aortic stenosis: a PARTNER trial cohort—a analysis.
J Am Coll Cardiol. 2014; 64: 1323-1334
,
3
The incidence and consequence of prosthesis-patient mismatch after surgical aortic valve replacement.
Ann Thorac Surg. 2018; 106: 14-22

Continuous variables are presented as mean ± standard deviation or median (interquartile range), and categorical variables as frequency (%). For continuous and categorical variables, comparisons between groups were conducted using the unpaired t test and Fisher exact test, respectively. Logistic regression analysis was performed to examine predictors for PPM. The factors with P < .20 were then entered appropriately into a multivariate model. A nonparametric receiver-operating-characteristic curve was constructed to show various cutoff values for the anatomic characteristics of aortic root (annular diameter, Valsalva diameter, and ST junction diameter) for evaluating the discrimination of PPM. Propensity score matching (1:1 matching, with the nearest neighbor matching without replacement) was performed to adjust for significant differences in baseline covariates and potential confounders that may lead to biased estimates between the SAVR and TAVR arms. A propensity score for each patient was calculated by performing a nonparsimonious multivariable logistic regression, with the type of intervention as the end point (SAVR coded as 0, and TAVR as 1). All variables that were significantly different at baseline and that might influence the choice of SAVR versus TAVR were considered: sex, BSA, maximum velocity (Vmax), AVAi, annulus diameter, Valsalva diameter, and ST junction diameter. Standardized differences before and after propensity matching of each variable were used to evaluate the magnitude of the difference between the 2 arms. After propensity score matching, for continuous and categorical variables, comparisons of bioprosthetic performances between groups were conducted using the paired t test and McNemar test. SPSS version 22.0 (IBM-SPSS Inc, Armonk, NY) was used to perform all statistical analyses.

Comparison of the Bioprosthetic Valve Performance in the TAVR and SAVR Arms Based on ST Junction Diameter (<22.5 mm or ≥22.5 mm)

This study has some limitations, which must be noted to interpret the findings of this study precisely. First, this was a single-center and nonrandomized retrospective study with a small number of patients. Second, several incomplete data existed in the SAVR arm because in approximately one-third of SAVR cases, EOA (or EOAi) was not assessed at discharge or on postoperative day 7. Third, this study lacks midterm or long-term outcomes. Especially, the influence of PPM or mild AR on late outcomes including left ventricular mass regression were not investigated in this study. Fourth, the pressure recovery phenomenon might influence these results to some extent; however, it is challenging to prove the influence of the pressure recovery phenomenon.
23
Significant intra-valvular pressure loss across EPIC SUPRA and perimount magna supra-annular designed aortic bioprostheses in patients with normal aortic size.
Indian Heart J. 2017; 69: 87-92
Fifth, a significant difference exists in age between the SAVR and TAVR arm patients even after propensity score matching because the age in the TAVR cohort is potentially older than that in the SAVR cohort. Finally, although various types of surgical bioprosthetic valves were included and evaluated in the SAVR arm of this study, only Sapien/Sapien XT was included in the TAVR arm.

Preoperative MSCT can predict PPM after SAVR but not TAVR. Especially in patients with a small ST junction, the prevalence of PPM in the SAVR arm of our trial was significantly higher than that in the TAVR arm (Video 1).

Authors have nothing to disclose with regard to commercial support.

© 2018 Published by Elsevier Inc. on behalf of The American Association for Thoracic Surgery