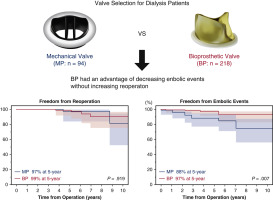 Outcomes of valve replacement with mechanical prosthesis versus bioprosthesis in dialysis patients: A 16-year multicenter experience

To evaluate the long-term outcomes of heart valve replacement with mechanical prosthesis (MP) versus bioprosthesis (BP) in patients on dialysis.

A retrospective review was performed at 7 hospitals. Patients on dialysis who underwent valve replacement were included. Survival, reoperation, bleeding, and embolic events were compared across the MP and BP groups.

Valve selection was not associated with late survival outcomes in patients on dialysis. However, BP may have an advantage in preventing embolic events without increasing the incidence of valve-related reoperation when compared with MP.

A retrospective review was performed at Kobe University and 6 affiliate hospitals (Hyogo Brain and Heart Center at Himeji, Tokushima Red Cross Hospital, Akashi Medical Center, Kita-Harima Medical Center, Kakogawa City Hospital, and Nishinomiya Watanabe Cardiovascular Center). Patients on dialysis who underwent valve replacement (aortic valve replacement [AVR], mitral valve replacement [MVR], or combined valve replacement of AVR and MVR [DVR]) were included. We compared survival, reoperation, bleeding, and incidence of embolic events between the MP and BP groups. The Japanese guidelines recommend valve selection based on patient age.
12
Guidelines for surgical and interventional treatement of valvular heart disease (JCS2012).
Jpn Circ Soc. 2012; 42: 1-75
In both AVR and MVR, patients younger than 65 years old were implanted with MP, whereas patients with 65 years old and greater were implanted with BP. In the MP group, the optimal international normalized ratio was set for <2.5 in patients receiving AVR and <3.0 in patients receiving MVR or DVR. In the BP group, anticoagulation therapy was indicated during the first 3 months following operation. However, the details of prosthetic valve selection and anticoagulation therapy were made by each hospital. Clinical outcomes were compared across both groups, including overall survival, valve-related reoperation, bleeding events, and embolic events. This study protocol was reviewed and approved by the institutional review board in each hospital. An informed consent waiver was granted.

All continuous variables are expressed as the mean ± standard deviation or the median with interquartile range (25th-75th percentile). Categorical variables are expressed as the number (%) of patients. Categorical variables and continuous variables were analyzed using the χ2 test and Student t test. The values of overall survival, freedom from valve-related death, freedom from bleeding events, and freedom from embolic events were computed using the Kaplan–Meier methods and are expressed as the rate ± standard error. P values <.05 were considered statistically significant differences. Univariate risk factor analysis of overall survival was performed on the cumulative incidence function using Cox regression and hazard ratio (HR) with 95% confidence interval (CI). A P value <.05 in the univariate analysis was defined for the selection variables for multivariate regression analysis of overall survival. Age, sex, and valve selection were included into the model to account for confounding factors. The survival of patients on general dialysis was obtained by the Japanese dialysis population life-table available from the Japanese Society of Dialysis Therapy,
14
http://docs.jsdt.or.jp/overview/
Date accessed: December 31, 2011
and matching the duration of hemodialysis with the present cohort (11.0 ± 8.6 years). All data analyses were performed with JMP 11.0 software (SAS Institute, Cary, NC).

There were some limitations in the present study. First, it was a retrospective study. Second, 7 hospitals were included in this study, allowing for variability in the details of procedures, the selection of the prostheses, echocardiographic follow-up, and management of anticoagulation therapy. Valve selection may include a bias, although it was primarily determined according to patient age. We did not have the data regarding patient compliance with anticoagulation therapy and the severity of patient condition because surgeon preference may be influenced with taking into these factors. We did not have adequate echocardiographic follow-up data that could diagnose SVD more precisely in the BP group.
Third, we included AVR, MVR, and DVR in the same cohort, given the infrequency of valve replacement surgery in patients on dialysis. Other studies thus far have not evaluated valve-related complications and have used smaller patient population than our current study.
22
Valve replacement surgery in end-stage renal failure: mechanical prostheses versus bioprostheses.
Ann Thorac Surg. 2006; 81: 857-862
Lastly, there were some differences in patient characteristics across groups. Although we performed multivariate Cox hazard analysis, several selection biases remained. We did not have the data regarding the differences between disease processes. Age was a variable that this study could not overcome because of the study design. Although our data suggest that BP group had an advantage in preventing embolic events, this is speculative. The expected bias favors MP over BP, given that patients with an expectation of longer survival or small annular diameter likely receive a MP over a BP.

Authors have nothing to disclose with regard to commercial support.

No funding was received for this study.

© 2018 by The American Association for Thoracic Surgery