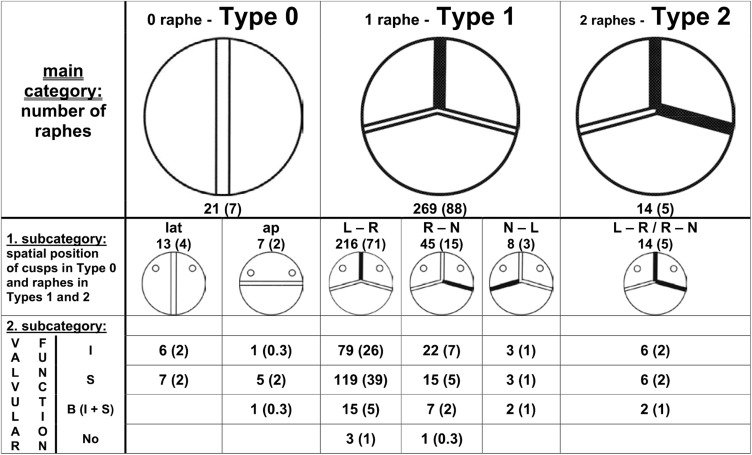 Aortic enlargement and aneurysm formation, especially in the ascending aorta, are part and parcel of BAV disease—the so-called bicuspid aortopathy.

The prevalence of BAV in the general population is known to be 1% to 2%.
1
The incidence of congenital heart disease.
J Am Coll Cardiol. 2002; 39: 1890-1900
,
16
Bicuspid aortic valve: clinical approach and scientific review of a common clinical entity.
Expert Rev Cardiovasc Ther. 2008; 6: 235-248
,
17
The natural history of a non-stenotic bicuspid aortic valve.
Br Heart J. 1978; 40: 951-957
,
18
Aortic dilatation in patients with bicuspid aortic valve.
N Engl J Med. 2014; 370: 1920-1929
,
19
[Update in aortic valve diseases].
Harefuah. 2007; 146 (909): 867-871
,
20
Bicuspid aortic valve.
J Insur Med. 2006; 38: 72-74
Hoffman and Kaplan
1
The incidence of congenital heart disease.
J Am Coll Cardiol. 2002; 39: 1890-1900
report a prevalence in this range based on “unselected consecutive necropsies,” which they consider the “standard” for detection. This makes BAV the most common congenital anomaly affecting the human heart (if one excludes tiny muscular ventricular septal defects that close spontaneously by 1 year of age). It is said that BAV accounts for more morbidity and mortality than all other congenital heart lesions combined.
18
Aortic dilatation in patients with bicuspid aortic valve.
N Engl J Med. 2014; 370: 1920-1929
,
21
Clinical significance of the bicuspid aortic valve.
Heart. 2000; 83: 81-85
This mortality may be incurred via multiple disease mechanisms: aortic stenosis (AS), aortic insufficiency (AI), or ascending aortic aneurysm and dissection. Male patients are thought to predominate, by a margin of approximately 2 to 1.
22
Echocardiographic prevalence of bicuspid aortic valve in the population.
Heart Lung Circ. 2006; 15: 297-299
It has been shown in a single-center experience that 50% of all aortic valve operations performed on patients aged more than 50 years are done for BAV disease.
23
Frequency by decades of unicuspid, bicuspid, and tricuspid aortic valves in adults having isolated aortic valve replacement for aortic stenosis, with or without associated aortic regurgitation.
Circulation. 2005; 111: 920-925
Likewise, 50% of all valve operations performed in patients with coarctation of the aorta can be attributed to BAV disease.
24
Aortic valve and aortic arch pathology after coarctation repair.
Heart. 2003; 89: 1074-1077
Although these statistics are staggering, the true burden of BAV disease may be grossly underestimated, because it may remain asymptomatic in childhood and even into adulthood, so that no imaging studies are indicated or performed.
25
Accuracy of 2-dimensional echocardiographic diagnosis of congenitally bicuspid aortic valve: echocardiographic-anatomic correlation in 115 patients.
Am J Cardiol. 1983; 51: 1469-1473

Heterogeneity is the rule in terms of the segment of the ascending aorta involved by bicuspid aneurysm.
26
Natural history of asymptomatic patients with normally functioning or minimally dysfunctional bicuspid aortic valve in the community.
Circulation. 2008; 117: 2776-2784
The tubular ascending aorta is most commonly involved (60%-70% of bicuspid aneurysms), although all segments, including the aortic root and the aortic arch, can be involved (Figure 2). There is evidence that the “root phenotype” of BAV aortopathy, in which the predominant dilatation is at the level of the sinuses of Valsalva, represents a more malignant and rapidly progressive aortopathy (Section 3.C).
29
Pattern of ascending aortic dimensions predicts the growth rate of the aorta in patients with bicuspid aortic valve.
JACC Cardiovasc Imaging. 2013; 6: 1301-1310
,
30
Risk of late aortic events after an isolated aortic valve replacement for bicuspid aortic valve stenosis with concomitant ascending aortic dilation.
Eur J Cardiothorac Surg. 2012; 42: 832-838
,
31
Aortic valve morphology determines the presentation and surgical approach to acute type A aortic dissection.
Ann Thorac Surg. 2014; 97: 1991-1997
,
32
Acute type A aortic dissection: characteristics and outcomes comparing patients with bicuspid versus tricuspid aortic valve.
Eur J Cardiothorac Surg. 2015; 48: 142-150
The marked heterogeneity of BAV-associated aneurysm location is distinctly different from other common types of ascending aortic aneurysms. Degenerative aneurysms tend to start in the mid-ascending aorta and then progress distally and proximally, whereas those associated with connective tissue disease are usually confined to the aortic root. BAV morphology and pathology seem to play a role in determining where the BAV-associated aneurysm is located (Section 3).

Although there is a definite genetic component to BAV disease, the precise patterns of inheritance have been elusive. Approximately 9% to 15% of first-order family members also have BAV disease, with men and women equally affected within those families.
34
A prospective study to assess the frequency of familial clustering of congenital bicuspid aortic valve.
J Am Coll Cardiol. 1997; 30: 1809-1812
,
35
Familial congenital bicuspid aortic valve: a disorder of uncertain inheritance.
Am J Med Genet. 1996; 62: 336-338
,
36
Congenitally bicuspid aortic valves. Clinicogenetic study of 41 families.
Br Heart J. 1978; 40: 1402-1407
These percentages are higher than in the general population (1%-2%), demonstrating the influence of genetics in this disease. Missense mutations in the NOTCH1 gene have been implicated in some patients with BAV disease.
37
Novel NOTCH1 mutations in patients with bicuspid aortic valve disease and thoracic aortic aneurysms.
J Thorac Cardiovasc Surg. 2007; 134: 290-296
,
38
A roadmap to investigate the genetic basis of bicuspid aortic valve and its complications: insights from the International BAVCon (Bicuspid Aortic Valve Consortium).
J Am Coll Cardiol. 2014; 64: 832-839
,
39
Mutations in NOTCH1 cause aortic valve disease.
Nature. 2005; 437: 270-274
The vital NOTCH signaling pathway, involved in differentiation of multiple organs (including skeletal muscle, central nervous system, pancreas, and blood vessels), is highly evolutionarily conserved (ie, in humans, mice, and zebrafish).
40
Notch signaling in vascular development.
Arterioscler Thromb Vasc Biol. 2003; 23: 543-553
High evolutionary conservation indicates critical pathways whose aberration is likely to lead to significant or life-threatening disease. NOTCH genes play an important role in familial bicuspid valve disease, but they are found in only 4% of spontaneous cases.
41
Novel missense mutations (p.T596M and p.P1797H) in NOTCH1 in patients with bicuspid aortic valve.
Biochem Biophys Res Commun. 2006; 345: 1460-1465
The variety and complexity of inheritance of BAV are under intense investigation but remain to be fully clarified.

BAV disease can cause morbidity and mortality through the valve disease (stenosis or insufficiency) or by ascending aortic aneurysm (leading to aortic dissection or, in rare cases, rupture). However, recent studies have demonstrated, in the modern era of diagnosis and care, an overall survival for patients with BAV identical to that of the normal population.
26
Natural history of asymptomatic patients with normally functioning or minimally dysfunctional bicuspid aortic valve in the community.
Circulation. 2008; 117: 2776-2784
As long as patients are followed regularly and surgery is offered in a timely fashion, then the risk of catastrophic aortic events is low. However, some important observations should be kept in mind when following patients with BAV.

It is important to recognize that neither AS nor AI needs to be present for aortic dissection to occur.
47
Association of aortic dilation with regurgitant, stenotic and functionally normal bicuspid aortic valves.
J Am Coll Cardiol. 1992; 19: 283-288
In BAV disease, valvular complications—AS or regurgitation—progress at their own independent rates, different from the rate of progression of the bicuspid aneurysm. Thus, the lack of AS does not preclude aortic dissection from occurring. However, patients with BAV and valvular disease (stenosis or insufficiency) are at increased risk of rupture and dissection of the aorta.
48
Bicuspid aortic valves are associated with aortic dilatation out of proportion to coexistent valvular lesions.
Circulation. 2000; 102: III35-III39
Evidence increasingly demonstrates regurgitant BAVs having a more malignant phenotype than stenotic BAVs, with a higher risk of aortic dissection.
49
Aortic dissection after previous aortic valve replacement for bicuspid aortic valve disease.
J Am Coll Cardiol. 2015; 66: 1409-1411
This topic will be discussed in more detail in Sections 3 and 6.

It is unclear whether any medical therapy is effective in preventing adverse events in aortic aneurysms of any kind, even in the most thoroughly studied Marfan population. Although beta-blockers and angiotensin receptor blocking drugs are commonly applied to “protect” the BAV, supportive evidence is lacking.
52
Medical treatment for thoracic aortic aneurysm - much more work to be done.
Prog Cardiovasc Dis. 2013; 56: 103-108
,
53
Medical therapy of thoracic aortic aneurysms: are we there yet?.
Circulation. 2011; 124: 1469-1476
,
54
Atenolol versus Losartan in Marfan's Syndrome.
N Engl J Med. 2015; 372: 977-978
However, such agents should be given to patients with documented hypertension. Statins have been shown to be ineffective, whereas other studies show a possible protective effect.
55
Effect of statins on aortic root growth rate in patients with bicuspid aortic valve anatomy.
Int J Cardiovasc Imaging. 2015; 31: 1583-1590

Evidence of phenotypic heterogeneity of BAV aortopathy has emerged in the last decade from several observational studies and stimulated a critical reappraisal of literature and treatment recommendations. The hypothesis has been proposed that different types of BAV aortopathy (ie, so-called aortic phenotypes) may be caused by distinct pathogenetic mechanisms and therefore require individualized surgical approaches.
59
Bicuspid aortopathy and the development of individualized resection strategies.
J Thorac Cardiovasc Surg. 2014; 148: 2080-2081
,
60
Phenotypic heterogeneity of bicuspid aortopathy: a potential key to decode the prognosis?.
Heart. 2014; 100: 96-97
In particular, the 2 long-debated theories on BAV aortopathy pathogenesis, namely, the genetic and the hemodynamic theories, could both be plausible inasmuch as different phenotypic forms might be subtended by different contributions of both causative factors. Phenotypic heterogeneity of BAV aortopathy also may explain to some extent the inconsistencies in published natural history and follow-up studies, especially regarding the risk of aortic events in BAV disease. Previous data from mixed BAV cohorts resulted in a broad spectrum of surgical treatment methods being suggested, ranging from very conservative approaches to very aggressive recommendations, usually extrapolated from guidelines for management of patients with connective tissue disorders (eg, Marfan syndrome).
5
2010 ACCF/AHA/AATS/ACR/ASA/SCA/SCAI/SIR/STS/SVM guidelines for the diagnosis and management of patients with Thoracic Aortic Disease: a report of the American College of Cardiology Foundation/American Heart Association Task Force on practice guidelines, American Association for Thoracic Surgery, American College of Radiology, American Stroke Association, Society of Cardiovascular Anesthesiologists, Society for Cardiovascular Angiography and Interventions, Society of Interventional Radiology, Society of Thoracic Surgeons, and Society for Vascular Medicine.
Circulation. 2010; 121: e266-e369
Although the evidence of BAV aortopathy heterogeneity has gained increasing recognition in the last decade, data on individual aortic phenotypes are still scarce. The majority of published natural history/follow-up studies contain mixed BAV cohorts and include different stages of BAV disease. A better understanding of the interaction among morphologic features, functional characteristics of the aortic root, and transvalvular hemodynamics is required.
Scientific efforts to address the phenotypic heterogeneity in BAV aortopathy were mainly based on valve-related factors, including BAV morphology (ie, number and location of fused cusps), functional lesion (ie, stenosis, insufficiency or mixed lesions), and shape/configuration of the proximal aorta, which are addressed in detail next.

D Shape of the Proximal Aorta

Transthoracic echocardiography (TTE) is the recommended imaging modality for the initial assessment of the aortic valve and thoracic aorta, including the assessment of hemodynamic valve function (Table 3; Figures 6 and 7).
155
Bicuspid aortic valve aortopathy in adults: incidence, etiology, and clinical significance.
Int J Cardiol. 2015; 201: 400-407
If any part of the examination is not possible by TTE, CT or MRI is recommended to assess the presence and extent of aortopathy (Figures 8 and 9). Hemodynamic valve assessment also can be performed by MRI,
156
Cardiac magnetic resonance imaging is more diagnostic than 2-dimensional echocardiography in determining the presence of bicuspid aortic valve.
J Thorac Cardiovasc Surg. 2012; 144: 370-376
although TTE remains the gold standard. TTE assessment of aortic valve function is usually sufficient, but transesophageal echocardiography (TEE) should be performed in patients with AI that is difficult to quantify with TTE. BAV-AI may result in an eccentric jet that can be better visualized with TEE, particularly if patients have less-than-severe AI by TTE and unexplained left ventricular dilation or dysfunction. In addition, TEE may best determine the mechanism of AI when aortic valve repair is being considered.
Table 3Recommendations for initial imaging of the aorta in patients with bicuspid aortic valve