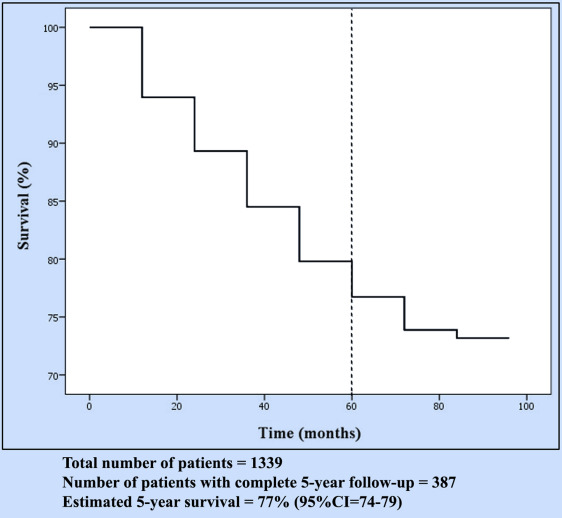 The long-term survival of robotic lobectomy for non–small cell lung cancer: A multi-institutional study
Previous ArticleIf your hospital has RATS, do not exterminate
Next ArticleTo robot or not to robot: Is that really the question?

Our objective is to report the world's largest series with the longest follow-up of robotic lobectomy for non–small cell lung cancer (NSCLC).

This was a multi-institutional retrospective review of a consecutive series of patients from 4 institutions' prospective robotic databases.

The oncologic results of robotic lobectomy for NSCLC are promising, especially for patients with pathologic N2 disease. However, further follow-up and studies are needed.

CT (computed tomography), EBUS (endobronchial ultrasound), NSCLC (non–small cell lung cancer), PET (positron emission tomography), UAB (University of Alabama at Birmingham), VATS (video-assisted thoracoscopy)
Central Message
Our objective is to report the world's largest series with the longest follow-up of robotic lobectomy for non–small cell lung cancer.
Perspective
The mid-term oncologic results of robotic lobectomy for non–small cell lung cancer are quite promising, especially for patients with pathologic N2 disease.
See Editorial Commentary page 787.
See Editorial page 777.
Lobectomy for non–small cell lung cancer (NSCLC) is best performed via minimally invasive techniques such as video-assisted thoracoscopy (VATS) and robotic surgery.
1
Open, video-assisted thoracic surgery, and robotic lobectomy: review of a national database.
Ann Thorac Surg. 2014; 97: 236-244
The latter has been shown to be safe and effective for pulmonary lobectomy for lung cancer with intraoperative and short-term postoperative metrics such as operative time, blood loss, conversions rates, ability to achieve R0 resection, length of stay, learning curve for surgeons, and postoperative pain.
2
Robotic video-assisted thoracoscopic lung resection for lung tumors: a community tertiary care center experience over four years.
Surg Endosc. 2015; 30: 619-624
,
3
Robotic video-assisted thoracoscopic lung resection: comparison of outcomes and learning curve from a single surgeon in a tertiary care center. In: C79. Multimodality approaches to diagnosis and treatment of lung cancer.
Am J Respir Crit Care Med. 2016; 193: A6022
,
4
Pain, quality of life, and clinical outcomes after robotic lobectomy.
Thorac Cardiovasc Surg. 2017; 65: 344-350
,
5
Robotic anatomic lung resections: the initial experience and description of learning in 102 cases.
Surg Endosc. 2016; 2: 676-683
,
6
Robotic lobectomy and segmentectomy for lung cancer: results and operating technique.
J Thorac Dis. 2015; 7: S122-S130
Some reports suggest that robotic lobectomy may boast improved lymph node resection and less blood loss than other forms of minimally invasive surgery.
7
Comparing robotic lung resection with thoracotomy and video-assisted thoracoscopic surgery cases entered into the Society of Thoracic Surgeons Database.
Innov Technol Tech Cardiothorac Vasc Surg. 2014; 9: 10-15
However, other reports suggest there is no advantage.
8
Nationwide assessment of robotic lobectomy for non-small cell lung cancer.
Ann Thorac Surg. 2017; 103: 1092-1100
Surgeons, insurers, Centers of Medicare and Medicaid Services, and even the Society of Thoracic Surgeons Database judge the quality of lobectomy via a strikingly myopic lens of 30- and 90-day mortality. The true value of an operation, if for reconstructive reasons, is its durability and the quality of life it offers over time compared with other treatment options and their costs. If the operation is performed for cancer, then the true value is the stage-specific 5-year survival rate and/or local recurrence rate compared with other treatment options and their cost. This may be the best metric of value over time. Yet, it is rarely mentioned as a surrogate for quality, and, interestingly, there are very few reports on the 5-year survival of any minimally invasive series that is not on patients with stage I cancer.
Robotic thoracic surgery is in its infancy, and there have been few to no reports on this important metric. Park and colleagues in 2012
9
Robotic lobectomy for non-small cell lung cancer (NSCLC): long-term oncologic results.
J Thorac Cardiovasc Surg. 2012; 143: 383-389
reported survival data in a series of 325 patients with a median follow up of 27 months (27/176 with stage IA, 6/72 with stage IB, and 5/54 with stage II had a follow-up of 5 years). However, only 38 of the 325 (12%) patients had actual 5-year survival data. The goal of this study is to provide an update on that experience, as many of those patients are in this study and we have added more patients to the report. As we collect more data, we obtain a more accurate view over time. This is to our knowledge the largest series of robotic lobectomy and the series with the longest median follow-up of patients who had completely resected NSCLC via robotic lobectomy. This enhances our understanding of the value of robotic lung cancer surgery.

This is a multicenter cohort study that used prospective databases from the thoracic surgery divisions of 4 institutions: (1) The University of Alabama at Birmingham (UAB) in Birmingham, Alabama; (2) The Miami Cancer Institute: Baptist Health of South Florida in South Miami, Florida; (3) The Istituto Clinico Humanitas Cancer Center, Istituto Europeo Di Oncologia in Milan, Italy; and (4) The Memorial Sloan Kettering Cancer Center in New York, New York. The study was approved by the institutional review board of each institution, and a data transfer agreement was made to UAB. All data regarding preoperative characteristics, operative details, hospital course, pathologic findings, and postoperative follow-up were recorded prospectively at the individual institutions and sent to UAB for data entry and analysis. The primary endpoint of this study was the 5-year survival of the patients.
Definitions were the same at each institution, and operative time was defined as the time from the first skin incision was made until the last skin incision was closed. The seventh edition of the International American Joint Commission on Cancer was used throughout the paper. Major morbidity was defined with the Society of Thoracic Surgeons General Thoracic Surgery Database Report 2012.
10
Comparison of two national databases for general thoracic surgery.
Ann Thorac Surg. 2015; 100: 1155-1161
Major complications included pneumonia, acute respiratory distress syndrome, bronchopleural fistula, pulmonary embolus, initial ventilator support >48 hours, reintubation, tracheostomy, myocardial infarction, and unexpected return to the operating room. Complications such as hemorrhage, pulmonary edema, atelectasis, stroke, kidney failure, and infection of the chest wound also were considered as major complications. Minor complications included atrial fibrillation, prolonged air leak, chylothorax, and readmission. The pathology that was considered “other” included clear cell, unspecified, poorly differentiated large cell carcinoma, and atypical carcinoid tumors.

Eligible patients were those with biopsy-proven or suspected primary NSCLC who underwent operation with the intent to cure and with the intent to perform it robotically. Patients who underwent lobectomy that was performed initially via VATS or open were excluded from this study unless the operation was started off robotically and converted. Clinical staging was performed with computed tomography (CT) of the chest and integrated whole-body positron emission tomography (PET) in all patients. In addition, staging via mediastinoscopy and/or endobronchial ultrasound (EBUS) was used liberally in selected patient groups, such as those with suggested N2 or N1 disease, those with synchronous tumors in different sides of the chest, or those with tumors larger than 5 cm (even if clinically node negative). This study included patients clinically staged as stage IV secondary to the presence of a second lung nodule seen concurrently in the opposite side of the chest. These patients were pathologically staged as stage IV if they harbored the same pathology in the 2 resected lung nodules but were treated as if they had synchronous staged tumors if their mediastinum and hilum had lymph nodes that were pathologically negative. In addition, stage III advanced disease that was resected also was included in this study. The different operative techniques used by the individual surgeons has been described previously at length.
11
Robotic assistance for video-assisted thoracic surgical lobectomy: technique and initial results.
J Thorac Cardiovasc Surg. 2006; 131: 54-59
,
12
Four-arm robotic lobectomy for the treatment of early-stage lung cancer.
J Thorac Cardiovasc Surg. 2010; 140: 19-25
,
13
Video robotic lobectomy.
Multimed Man Cardio-Thorac Surg. 2005; 2005 (mmcts.2004.000448)

Patients who had benign disease, small cell lung cancer, or metastatic lesions resected via robotic lobectomy were excluded from this study. Furthermore, patients who underwent segmentectomy also were excluded.

Postoperative surveillance was similar at each institution and consisted, in general, of a CT scan of the chest and upper abdomen at 3- to 6-month intervals with appropriate scans if suspicious lesions were detected. Patients also had integrated PET/CT scans if CT scan suggested a new lesion greater than 8 mm but PET was not implemented routinely as part of the postoperative surveillance program. Follow-up data were obtained via medical records, letters, and/or telephone calls to the following physicians. Patient consent was obtained for inclusion in the individual centers' prospective database but was not obtained specifically for this particular study. The institutional review board number for this study at the reporting center (UAB) was X150223002.

From 2003 through 2016, 1339 patients underwent intended robotic lobectomy for primary NSCLC with intent to cure. Table 1 depicts the various patient numbers, characteristics, and dates of inclusion from each institution. Table 2 shows the preoperative disease characteristics and short-term outcomes (estimated blood loss, conversions, length of stay, and pathology). R0 resection was obtained in all but 3 patients who had microscopic disease noted on final pathology but was thought to be R0 at the time of the operation.
Table 1Institutional numbers and patient characteristics
UAB, University of Alabama at Birmingham; IEO, Istituto Europeo Di Oncologia; MSKCC, Memorial Sloan Kettering Cancer Center; N/A, not available; PFT, pulmonary function test; FEV1, forced expiratory volume in one second; DLCO, diffusing capacity of the lungs for carbon monoxide.
Table 2Preoperative disease characteristics and operative outcomes
In this study, stage IIIA included a highly selected group of patients who had a single station N2 disease. Stage IIIB included 8 patients who were clinically staged as T4N2 who had multiple pulmonary nodules found in different ipsilateral lung lobes. Stage IV included 18 patients with multiple nodules found in the contralateral chest who had no concurrent nodal disease and which could have been separate primaries. UAB, University of Alabama at Birmingham; IEO, Istituto Europeo Di Oncologia; MSKCC, Memorial Sloan Kettering Cancer Center; RUL, right upper lob; RML, right middle lobe; RLL, right lower lobe; LUL, left upper lobe; LLL, left lower lobe; N/A, not available.
∗ According to the American Joint Committee on Cancer (Seventh Edition): Lung Cancer Staging.
† Length of stay considers any hospital stay less than 24 hours as 1 day.
Follow-up was complete in 99% of patients, and only 1% were lost to follow-up. The median length of follow-up is currently 30 months. Figure 1 depicts the overall 5-year curve for the various stages of NSCLC along with the number of patients actually alive in that time frame. Figure 2 shows the survival based on the specific stages with the number of patients at risk at each time interval. The total number of recurrence was 128 patients (cumulative incidence = 15%; 95% confidence interval, 13%-18%) with a median disease-free interval of 16 months (range 1-82). Local recurrence occurred in 26 patients (cumulative incidence = 3%; 95% confidence interval, 2%-5%).
There were 122 patients with pathologic-proven N2 disease; 31 were proven before lobectomy via mediastinal lymph node sampling, and 91 had pathologic N2 disease after resection. Of the 31 patients with preoperative proven N2 disease, 27 (87%) underwent neoadjuvant chemotherapy before resection and 4 had neoadjuvant chemo- and radiotherapy. Their 5-year survival was 51%. Of the 91 patients with pathologic N2 disease who did not have neoadjuvant treatment, 70 (77%) underwent adjuvant chemotherapy and 10 had adjuvant chemo- and radiotherapy. Their 5-year survival was 66%.

Dr Cerfolio is a consultant for Intuitive, C-SATS, Bovie, Ethicon, Covidien/Medtronic, Community Health Services, Davol/Bard, Myriad Genetics, KCI an Acelity Company, and Verb Medical. Dr Veronesi was a past proctor for a Medica. Dr Park is on the speakers' bureau for Bard-Davol and was a past proctor for Intuitive Surgical. Dr Dylewski is a consultant for Intuitive surgical, Ethicon, Verb medical, and Bard. All other authors have nothing to disclose with regard to commercial support.