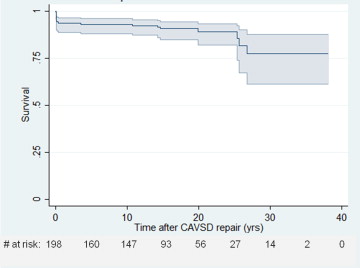 Survival after surgical repair for complete atrioventricular septal defect (CAVSD) has improved, but patients are at risk for reoperation to address left atrioventricular valve regurgitation and left ventricular outflow tract obstruction. We examined the long-term survival, need for reoperation, and associated risk factors after CAVSD repair at our institution.

A total of 198 patients who had undergone complete surgical repair for CAVSD between the years 1974 and 2000 were identified from the Children's Hospital of Wisconsin surgical database. Patients with an associated diagnosis of tetralogy of Fallot, defined as subvalvular and/or valvular pulmonary stenosis that required intervention at the time of CAVSD repair, were excluded from this total. Patients with partial AV septal defect (ostium primum atrial septal defect), intermediate-type AV septal defect (a common AV valve or 2 separate AV valve orifices, but restrictive or absent ventricular septal defect), or unbalanced forms of AV septal defect who underwent single-ventricle palliation were excluded. The protocol was approved by the Children's Hospital of Wisconsin Institutional Review Board.

The 198 patients were divided into 2 groups, to determine the impact of surgical era on long-term outcomes. The early surgical era included those patients who underwent repair from 1974 to 1990 (n = 93; 47%); the late surgical era included patients who underwent repair from 1991 to 2000 (n = 105; 53%). Surgical repair of CAVSD was performed with either the classic 1-patch technique or the 2-patch technique, along with closure of the left AV valve cleft, as previously described.
9
Endocardial cushion defects.
in: Litwin S. Color Atlas of Congenital Heart Surgery. 2nd ed. Springer, New York2007
Briefly, the classic 1-patch technique was performed by dividing the common superior and inferior bridging leaflets, leaving slightly more tissue on the left side of the common AV valve. A single Dacron patch was sutured onto the right side of the ventricular septum, to close the septal defect, and the AV valve components were attached to the patch using felted mattress sutures, along with closure of the cleft of the left AV valve leaflet.
The 2-patch technique was performed by first closing the ventricular septal defect with a Dacron patch. The ventricular septal defect patch was positioned under the bridging leaflets and secured to the right side of the ventricular septum. Sutures were passed through the superior edge of the patch and through the bridging leaflets at the point of division between the right and left components of the common AV valve. These same sutures were passed through a second atrial septal defect patch and tied. The cleft of the newly constructed left AV valve was closed with interrupted sutures before completion of the atrial septal defect closure. Most patients in the early surgical era underwent repair with the classic 1-patch technique (79.6%), compared with the 2-patch technique (20.4%). In the late surgical era, most patients underwent the 2-patch technique (98%). No patient underwent repair with the modified 1-patch technique.

A retrospective analysis of medical records was performed for all 198 patients, to identify operative and long-term mortality and need for reoperation after CAVSD repair, as well as risk factors for mortality and reoperation, including surgical technique, surgical era, age at repair, and associated diagnoses. For the 178 hospital survivors, a total of 153 patients (86.0%) had available and current data within the past 5 years that were obtained from either the medical record (n = 132) or a medical questionnaire that was sent to and returned by the patient's primary care physician inquiring about recent clinical status (n = 21). The mean follow-up for hospital survivors was 17.42 ± 7.8 years (median = 17.2 years; range = 2 months to 38.1 years).

Continuous variables are reported as mean ± SD, or median with range, and categoric variables are presented as frequencies and percentage of total. Groups were compared using χ2 analysis or the Fisher exact test for categoric variables and the Wilcoxon rank sum test for continuous variables. Cox proportional hazards models were used to evaluate the risk factors for mortality and need for reoperation. Risk factors for left AV valve reoperation and left ventricular outflow tract obstruction surgery were evaluated separately because these risks may occur at different time points. For these models, log transformation of age at initial repair was required, and interactions between variables were evaluated. Estimates of overall survival and freedom from late reoperation were calculated using the Kaplan-Meier method and compared, when necessary, using the log-rank test. Data were analyzed using StataIC 13 (Stata Corporation, College Station, Tex).

The patient characteristics for the 198 patients that underwent complete surgical repair for CAVSD are summarized in Table 1. The mean age at the time of repair was 1.36 ± 1.9 years (median = 8.1 months; range = 1 month to 15 years). The mean age decreased, from 1.96 years in the early surgical era to 9.9 months in the late surgical era.
Table 1Patient characteristics for 198 patients at the time of complete repair for complete atrioventricular septal defect repair
SD, Standard deviation; LVOT, left ventricular outflow tract.
Associated diagnoses included Down syndrome in 156 patients (78.8%), coarctation of aorta in 6 (3.0%), and left ventricular outflow tract obstruction in 2 (1.0%). A total of 32 patients (16.2%) underwent palliation with a pulmonary artery band before complete repair of CAVSD.

A total of 20 early operative deaths occurred, defined as death within 30 days after CAVSD repair or before hospital discharge, resulting in an overall early mortality of 10.1%. The early mortality decreased significantly from 18.2% (17 of 93 patients) in the early surgical era to 2.9% (3 of 105 patients) in the late surgical era (P < .001).
Among the 178 hospital survivors, 15 late deaths occurred after initial CAVSD repair. The cause of late death was cardiac related in 9 patients. Causes of cardiac-related deaths included: complications related to congestive heart failure in 1 patient who had a large residual ventricular septal defect who developed pneumonia and respiratory failure; 1 patient with severe left AV valve regurgitation who died in the postoperative period after left AV valve replacement at age 2 months; 1 patient with late diagnosis of coarctation of aorta who died in the postoperative period after surgical aortic arch repair; 2 patients with dilated cardiomyopathy of unknown etiology that may have been related to a history of complete heart block and/or the need for chronic ventricular pacing; and 3 patients with sudden death. The 3 patients with sudden deaths all had less-than-severe left AV valve regurgitation, and no known residual cardiac defects at last follow-up. The causes of death were noncardiac or unknown in 6 patients.
The estimated overall survival for all CAVSD patients (n = 198) was 85% at 10 years, 82% at 20 years, and 71% at 30 years after initial CAVSD repair (Figure 1). When early postoperative deaths were excluded, the estimated overall survival for the hospital survivors was 95% at 10 years, 92% at 20 years, and 80% at 30 years after initial CAVSD repair.

Although this study includes a large cohort of patients who underwent surgical repair of CAVSD, it has several limitations. It is a retrospective study, over a long study period at a single tertiary care center, with variable and incomplete follow-up among patients. All patients underwent surgical repair at Children's Hospital of Wisconsin, mostly with 1 of 2 cardiovascular surgeons, and outcomes may not account for variations in surgical techniques and postoperative management at other institutions. Diagnostic studies at the time of initial CAVSD repair were not available for all patients and therefore could not be included in the analysis for long-term outcomes. Finally, although this study focused on mortality and reoperation, data on functional status, quality of life, arrhythmias, and other important late clinical outcomes were not available on all late survivors.

© 2015 The American Association for Thoracic Surgery. Published by Elsevier Inc.