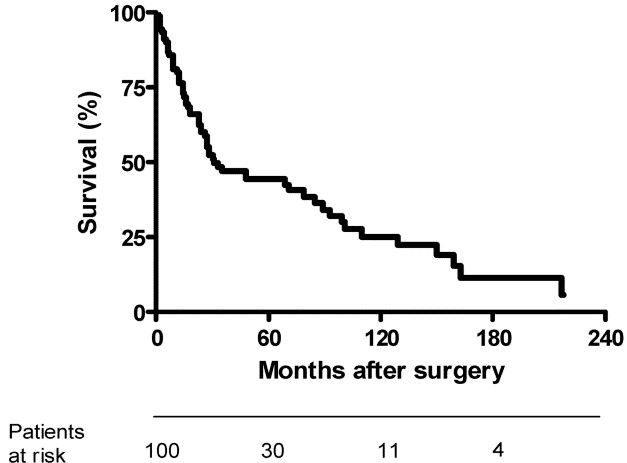 Long-term results after carinal resection for carcinoma: Does the benefit warrant the risk?

Published:December 05, 2005DOI:https://doi.org/10.1016/j.jtcvs.2005.07.062
Long-term results after carinal resection for carcinoma: Does the benefit warrant the risk?
Previous ArticleRisk factors for primary graft dysfunction after lung transplantation
Next ArticleOn the Move

We sought to determine whether the benefit warrants the risk in patients undergoing carinal resection for carcinoma.

This was a retrospective single-center study.

Surgical intervention for carcinoma involving the carina is feasible, with acceptable mortality and good long-term survival in selected patients. The presence of positive N2 disease should, however, be considered a potential contraindication to carinal resection in patients with bronchogenic carcinoma because of the poor long-term survival.

CT (computed tomography), NSCLC (non–small cell lung carcinoma), PTFE (polytetrafluoroethylene), SVC (superior vena cava)
Refinement in techniques of tracheal surgery and bronchial sleeve lobectomy has made carinal resection and reconstruction possible. However, the potential for complications remains high, and few centers only have accumulated sufficient expertise to safely perform the operation. Although the risks of carinal resection and reconstruction are certainly justifiable in patients with benign and low-grade malignancies, the usefulness of carinal surgery for carcinoma involving the carina is still questionable. Few series have reported long-term survival after carinal resection for bronchogenic carcinomas or adenoid cystic carcinomas involving the carina.
1
Resection for bronchogenic carcinoma involving the carina long-term results and effect of nodal status on outcome.
J Thorac Cardiovasc Surg. 2001; 121: 465-471
,
2
Long-term survival after resection of primary adenoid cystic and squamous cell carcinoma of the trachea and carina.
Ann Thorac Surg. 2004; 78: 1889-1897
,
3
Indications and results of sleeve carinal resection.
Eur J Cardiothorac Surg. 2002; 22: 685-694
The objective of this article is to review our experience in carinal resection for carcinoma and to determine whether the benefit warrants the risk.

All patients who underwent carinal resection for carcinoma in our institution between June 1981 and August 2004 were reviewed. Patients undergoing carinal resection for benign diseases or malignant diseases other than carcinoma were excluded from the study. Data were obtained from the hospital database, hospital charts, referring physicians, and/or from the patients or the patients’ family. Follow-up was completed up to August 2004 or to the date of death. Postoperative death included all patients who died within 30 days of surgical intervention or before being discharged from the hospital. The study was approved by the institutional review board.

The preoperative workup has evolved over the years but currently consists of chest radiography, chest computed tomography (CT), pulmonary function testing, arterial blood gas measurement, ventilation-perfusion scanning, electrocardiography, and echocardiography. CT scanning of the upper abdomen and CT or magnetic resonance imaging of the brain are routinely performed to exclude distant metastasis. Bronchoscopy is always performed preoperatively to determine the extent of involvement and adequacy of the remaining airway. Mediastinoscopy is performed at the time of surgical intervention in patients presenting with bronchogenic carcinoma to exclude N2 disease. Bone scanning is performed in symptomatic patients or in patients with abnormal blood work. Stress thallium studies, maximum oxygen uptake, and exercise testing are used when indicated.
Pulmonary angiography is performed for carinal tumors arising from the anterior segment of the right upper lobe because invasion of the right upper lobe (mediastinal) artery usually indirectly reveals invasion of the posterior aspect of the superior vena cava (SVC). Superior cavography is performed if the SVC is potentially involved. Transesophageal echography is occasionally performed to evaluate tumor extension to the posterior mediastinum, especially the esophagus or the left atrium.

Our technique of carinal resection has been reviewed in detail elsewhere.
4
Carinal resection for bronchogenic cancer.
Semin Thorac Cardiovasc Surg. 1996; 8: 414-425
,
5
Techniques of pneumonectomy. Sleeve pneumonectomy.
Chest Surg Clin N Am. 1999; 9 (xi): 407-417
Only some specific points are presented herein. The patient is initially intubated with an extra-long oral endotracheal tube that can be advanced into the opposite bronchus if single-lung ventilation is desired. Once the carina has been resected, the opposite main bronchus is intubated with a cross-field sterile endotracheal tube connected to a sterile tubing system. After the trachea and bronchi are anastomosed, the cross-field tube is withdrawn, and the patient is ventilated through the endotracheal tube left in place above the anstomosis.
The incision varies according to the type of carinal resection. Carinal resection without sacrifice of pulmonary parenchyma is approached through a median sternotomy. The pericardium is opened anteriorly, and the tracheobronchial bifurcation is exposed between the SVC and the ascending aorta. The exposure is facilitated by completely mobilizing the ascending aorta and both main pulmonary arteries. The ligamentum arteriosum is systematically sectioned.
Right carinal pneumonectomy is performed through a right thoracotomy in the fifth intercostal space. After division of the azygos vein, the tracheobronchial bifurcation is mobilized. Circumferential dissection should be limited to no more than 2 cm from the proposed lines of transection of the lower trachea and the left main bronchus. If segmental resection of the SVC is planned, the vascular procedure is usually performed before division of the airway. The SVC is clamped proximally at the confluence of the brachiocephalic veins and distally at the cavoatrial junction and divided on each side of the tumor. Section of the SVC facilitates exposure and stapling of the right pulmonary artery in the interaortocaval groove. The SVC is reconstructed with a ringless straight 18 or 20-mm sized polytetrafluoroethylene (PTFE) graft. The PTFE graft is protected with gauze soaked in povidone-iodine during reconstruction of the airway to prevent graft contamination.
Although left carinal pneumonectomy was performed through a left thoracotomy early on in our experience, median sternotomy is currently our preferred approach. Median sternotomy provides superb exposure to the tracheobronchial bifurcation, has less incisional discomfort, and results in less ventilatory restriction than a thoracotomy. The main disadvantages are that freeing pleuroparietal adhesions can be difficult, and mobilization of the left hilum requires cardiac retraction that might cause some hemodynamic instability.
The tracheobronchial anastomosis is always performed in an end-to-end fashion. We first apply a running 4-0 polydiaxone (PDS; Ethicon, Inc, Somerville, NJ) suture on the deepest aspect of the airway with respect to the surgeon. For instance, in a right carinal pneumonectomy this represents the left aspect of the cartilage wall of the trachea and left main bronchus. The running suture is then tied at each end with 2 independent polydiaxone sutures, the knots of which are made outside the lumen. Thereafter, several interrupted stitches of 3-0 polydiaxone or 3-0 Vicryl (Ethicon, Inc) are placed in the remaining part of the anastomosis. They are tied after all of them have been placed to correct for size discrepancies. The stitches applied on the membranous portion are tied at the end to avoid any traction and potential tears.
At the end of the procedure, the anastomosis is controlled with bronchoscopy, and secretions are cleaned up from the airways. Patients are extubated in the operating room. Pain relief is achieved with epidural analgesia or patient-controlled analgesia. A temporary tracheostomy can be performed at the end of operation to reduce the physiologic respiratory dead space and facilitate direct aspiration when the predicted residual ventilatory functional reserve is borderline or the patient’s collaboration is reduced.

All results are expressed as medians and ranges or as absolute numbers and percentages. Potential risk factors for postoperative mortality were identified by means of univariate and multivariate analysis. All variables were initially subjected to univariate analysis with the χ2 test to avoid overadjustment by using too many variables in the multivariate models. Factors with a P value of less than .1 were then considered as risk factors in the multivariate logistic regression analysis. Survival rates were calculated by means of life-table analysis. Kaplan-Meier curves were plotted and compared with the log-rank test. Statview V (Abacus Concept, Berkeley, Calif) software was used for all analyses.

© 2006 The American Association for Thoracic Surgery. Published by Elsevier Inc. All rights reserved.