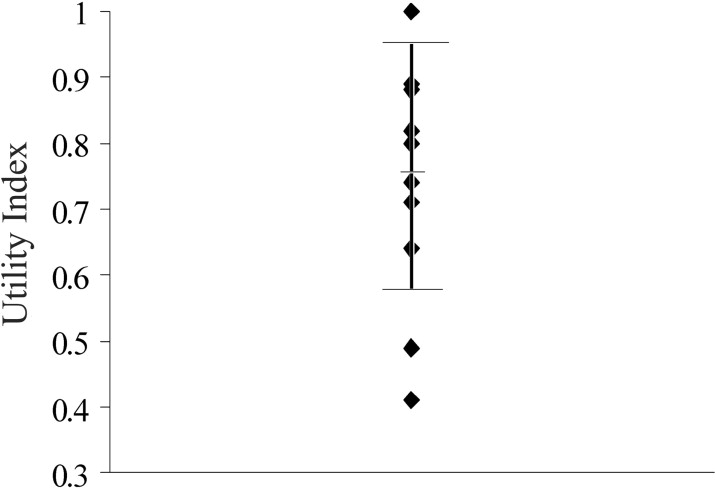 Medical records of patients with congenital heart disease receiving salvage cardiac extracorporeal membrane oxygenation between January 2000 and May 2004 were reviewed. Charges for all medical care after the institution of extracorporeal membrane oxygenation were determined and converted to costs by published standards. The quality-of-life status of survivors was determined with the Health Utilities Index Mark II.

With the approval of the Institutional Review Board of Emory University School of Medicine, we constructed a decision-analytic model to examine the cost utility of salvage cardiac ECMO. We adopted the perspective of a clinician who must decide whether to institute a program of routine salvage cardiac ECMO. For the purposes of this study, salvage cardiac ECMO was defined as institution of ECMO in the setting of (1) acute cardiac arrest for children with underlying heart disease or (2) hemodynamic failure after surgery for congenital heart disease. This study excluded patients with structurally normal hearts in whom myocarditis, arrhythmia, or both, develop and who are placed on ECMO electively. The main reason for excluding these subjects is that it is difficult to know how they might have done had they not received ECMO. For other pediatric conditions, such as acute respiratory distress syndrome, investigators have developed algorithms for risk of death, such as the Pediatric Index of Mortality. To our knowledge, these algorithms have not been validated in the setting of isolated cardiac disease. In the absence of such data, we believed it more appropriate to exclude children placed on ECMO electively. Our center does not routinely use ECMO after certain congenital heart procedures, such as the Norwood operation, as has been advocated by some institutions.
12
Use of ECMO without the oxygenator to provide ventricular support after Norwood stage I procedures.
Ann Thorac Surg. 2001; 71: 735-736
We included all patients who received salvage cardiac ECMO from January 1, 2000, to May 1, 2004. The primary outcome was cost-utility, which calculates the cost per quality-adjusted life-year (QALY) saved. Costs are reported in 2003 US dollars.

The analysis accounted for medical costs that would be incurred after hospital discharge for survivors. For patients with a single ventricle, the mean costs of a bidirectional Glenn procedure (Current Procedural Terminology 33767) and a modified Fontan procedure (Current Procedural Terminology code 33619) were derived from hospital sources. The cost of additional prosthetic mitral valve operation was not included, because the timing for such operations can vary considerably among patients. We assumed an annual visit with a cardiologist and a limited echocardiographic examination and electrocardiogram on a semiannual basis for all subjects with congenital heart disease. Costs for these encounters were derived from published Medicare sources.
14
The Medicare five-year review—a progress report.
J Am Soc Echocardiogr. 1996; 9: 25A-28A
,
15
The Health Utilities Index (HUI®) concepts, measurement properties and applications.
Health Qual Life Outcomes. 2003; 1: 54
Annual costs for lifetime medications, such as digoxin, angiotensin-converting inhibitors, diuretics, or immunosuppressants, for those undergoing heart transplantation were included in the model. We did not include costs for noncardiology medical services or medications.

Utility data—to evaluate the quality of life—in children and adults with congenital heart disease are lacking. However, to make comparisons between salvage cardiac ECMO and other public health interventions, we used the Health Utilities Index Mark II (HUI-2).
15
The Health Utilities Index (HUI®) concepts, measurement properties and applications.
Health Qual Life Outcomes. 2003; 1: 54
The HUI-2 is a 15-item questionnaire designed to ask the minimum number of questions required to classify a subject℉s health status. Parents completed the HUI-2 in all cases. From questionnaire responses, one can derive a multiattribute utility function. Scores range from death to full health (0 to 1.00). The HUI-2 has been shown to have reasonable interrater reliability and has previously been applied to a number of other pediatric disease states.
16
Reliability and validity of comprehensive health status measures in children the Child Health Questionnaire in relation to the Health Utilities Index.
J Clin Epidemiol. 2002; 55: 67-76
,
17
Assessment of health status and health-related quality of life in survivors of Hodgkin℉s disease in childhood.
Int J Cancer Suppl. 1999; 12: 32-38

Because the study was limited to patients receiving salvage cardiac ECMO, we assumed that mortality would be 100% had the subjects not been placed on ECMO. Subsequent costs and life-years saved were, therefore, calculated from the time of institution of ECMO onward. Although historical studies have demonstrated that the survival for patients with congenital heart disease is less than for the healthy population, outcomes have been improving in recent decades. Therefore, for patients with 2-ventricle circulation, life expectancy was assumed to be normal: 77.2 years, according to recent vital statistics.
18
Annual summary of vital statistics—2002.
Pediatrics. 2003; 112: 1215-1230
The life expectancy for children with single-ventricle heart lesions was assumed to be 40 years. The median life expectancy of 40 years in single-ventricle patients was derived from an expected 10-year survival of 80% and a 10% risk of death per decade on the basis of analysis of historical cohorts.
19
The Fontan procedure for tricuspid atresia early and late results of a 25-year experience with 216 patients.
J Am Coll Cardiol. 2001; 37: 933-939

All future costs and benefits were discounted at a rate of 3%. Discounting is used to calculate life-years lost.

For cost-utility analysis, we evaluated the sensitivity of the model to variations in key assumptions over various ranges. We varied the hospital mortality for salvage cardiac ECMO in congenital heart disease patients from 30% to 70%. We also varied the utility score ±0.20 to a maximum of 1.0 to account for the possibility that health status might change significantly in later years.

Between January 1, 2000, and May 1, 2004, cardiac ECMO was instituted in 39 patients. Seven subjects with normal cardiac anatomy and myocarditis, arrhythmias, or both were placed on ECMO electively and had a hospital survival of 86%. Salvage cardiac ECMO was used in 32 patients (18 for cardiopulmonary arrest, 11 for failure to wean from bypass after surgery, and 3 for ventricular dysfunction, pulmonary hypertension, or both immediately after surgery) at a median age of 2.0 months (range, 4 days to 5.1 years; Table 1). Congenital heart disease was present in 27 (84%). Among the congenital heart defects were hypoplastic left heart syndrome (n = 6), other single-ventricle disease (n = 5), total anomalous pulmonary venous connection (n = 3), interrupted aortic arch (n = 2), anomalous left coronary from the pulmonary artery (n = 2), double-outlet right ventricle (n = 2), mitral stenosis (n = 2), tetralogy of Fallot (n = 2), pulmonary atresia with ventricular septal defect (n = 1), D-transposition of the great arteries (n = 1), and heart transplantation (n = 1). One subject had VATER syndrome,
⁎
VATER = vertebral defects, imperforate anus, tracheoesophageal fistula, and radial and renal dysplasia.
and 1 patient had DiGeorge syndrome. Three patients were placed on ECMO for cardiac arrest at presentation and underwent congenital heart operation later during that hospitalization.
TABLE 1Patient population
ECMO, Extracorporeal membrane oxygenation; CPB, cardiopulmonary bypass.
The mean duration of ECMO support was 5.1 ± 4.1 days. Survival to hospital discharge was 50%, including 1 patient who was bridged to heart transplantation. Survival to 1 year for the entire cohort was 47%. Two of the initial 16 hospital survivors subsequently died. One death occurred 5 months after ECMO decannulation in a patient with low cardiac output after a Glenn procedure for hypoplastic left heart syndrome. A second patient with VATER syndrome and multiple congenital anomalies and tracheostomy died out of hospital from acute respiratory failure 21 months after discharge from ECMO hospitalization.
Sixteen patients did not survive to hospital discharge. Most of these deaths (n = 10) occurred while subjects were still receiving ECMO support or within 72 hours of decannulation. An additional 6 subjects died more than 72 hours after decannulation during the same hospital stay. The most common cause of death was multiple organ system failure (n = 6). Two patients had neurologic injuries that prompted withdrawal of ECMO support. Additional causes of death in these subjects included cardiopulmonary arrest (n = 3), acute graft rejection after transplantation (n = 1), ventricular dysfunction (n = 1), sepsis (n = 1), pneumatosis intestinalis (n = 1), and complications with the ECMO circuit (n = 1).
While receiving ECMO support, patients were evaluated for neurologic injury. Evaluations included neurologic examinations and brain imaging in most cases. There were 7 patients with significant neurologic events. Neuroimaging studies demonstrated watershed infarct (n = 4), embolic infarct (n = 2), small subdural hematoma (n = 1), and grade IV interventricular hemorrhage (n = 1). Of the 16 subjects who survived to hospital discharge, 3 were noted to have gross motor weakness. Two subjects had significant cognitive impairment.

Most survivors (82%) had congenital heart defects that were likely to require lifelong care by a cardiologist. For survivors with congenital heart disease, the calculated annual mean cost of medications, evaluation by a cardiologist, and imaging was $446 per year. Patients with single-ventricle anatomy routinely undergo a bidirectional Glenn procedure and modified Fontan procedure at 4 to 6 months and 18 to 24 months of age, respectively. At our institution, the mean cost of the Glenn procedure is $24,554 ± $5,945, and the mean cost of a Fontan procedure is $28,808 ± $7,906. The costs of follow-up after transplantation were derived from published literature.
20
Fontan palliation versus heart transplantation a comparison of charges.
Am Heart J. 1996; 131: 1169-1174
These data were included in the economic analysis.

© 2005 The American Association for Thoracic Surgery. Published by Elsevier Inc. All rights reserved.