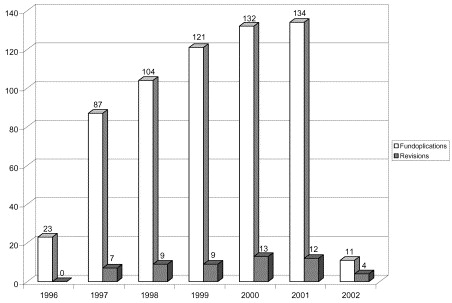 This study was undertaken to determine the safety and efficacy of reoperative laparoscopic fundoplication for patients with failed fundoplication.

The primary symptoms that led to reoperation in the 54 patients were heartburn (n = 26), dysphagia (n = 23), and gas bloat (n = 5). Average time from initial operation to reoperation was 22.7 months. There were 3 conversions to open technique. An anatomic reason for the failure of the initial fundoplication was found in 69% of cases: slipped or misplaced fundoplication (n = 14), disrupted fundoplication (n = 8), transdiaphragmatic herniation (n = 7), achalasia (n = 1), and tight fundoplication (n = 7). Fourteen patients had 15 perioperative complications. Mean hospital stay was 2.3 days. Symptoms such as heartburn, dysphagia, and gas bloat improved significantly after reoperation; 40% to 50% of patients had scores 0 to 2, 21% to 45% had scores 3 to 7, and 9% to 29% had scores 8 to 10. Proton-pump inhibitor use after operation decreased from 88% to 36%. Fifty-two percent of patients completely discontinued any antireflux medications. Three patients had failure of the reoperation and required additional procedures.

Laparoscopic reoperation for failed fundoplication is feasible and can achieve resolution of symptoms for a significant percentage of patients.

Approximately 40% of US adults have reflux symptoms at least once a month, 14% weekly, and 7% daily.
1
A Gallup survey on heartburn across America.
The Gallup Organization, Washington, DC1988
,
2
Symptomatic gastroesophageal reflux incidence and precipitating factors.
Am J Dig Dis. 1976; 21: 953-956
,
3
Antireflux surgery. Indications, preoperative evaluation, and outcome.
Gastroenterol Clin North Am. 1999; 28 (, viii): 987-1005
Of these, about 4 in 1000 go on to have complications of gastroesophageal reflux disease (GERD), such as ulceration, stricture, or dysplasia, that mandate surgical or medical treatment.
4

Between June 1996 and January 2002, a total of 612 consecutive patients underwent fundoplication for medically recalcitrant GERD at the West Penn Allegheny Health System. All operations were performed by three experienced laparoscopic surgeons (R.J.K., R.J.L., and R.H.M.). Follow-up data (office visits and phone interviews) were available for 92% of the patients. The mean follow-up time was 23.4 months. Thirty-nine of the 612 patients (6.4%) required revision of their initial fundoplication. During the same period, 15 patients who had been operated on at other institutions were referred to our practice for failure of their primary repair (Figure 1). Previous operations included laparoscopic Nissen fundoplication (n = 42), laparoscopic Toupet fundoplication (n = 4), open Nissen fundoplication (n = 7), and Belsey Mark IV fundoplication (n = 1). Seven of the 15 referred patients had undergone an open fundoplication. We conducted a retrospective analysis to determine the primary symptom that led to reoperation, the reason for failure of the initial surgery, the success of reoperation in alleviating GERD symptoms, and the postoperative need for antireflux medications.
Workup before reoperative fundoplication included esophagogastroduodenoscopy (EGD) and barium esophagogram in all cases. Esophageal manometry was performed in 34 of 54 cases (63%), and 24-hour esophageal pH monitoring was done in 32 of 54 cases (59%). The remaining patients either refused or could not tolerate the studies. A nuclear motility study was ordered for 5 of those patients. Another 5 patients underwent nuclear gastric emptying studies to rule out gastroparesis. Patients with impaired esophageal peristalsis were offered a partial fundoplication.
Patients were offered reoperative repair if they had evidence of anatomic failure of the fundoplication that correlated with their symptoms. Patients with normal configuration of the fundoplication but with evidence of esophagitis on EGD or abnormal 24-hour pH study were offered surgery if they medical treatment of their GERD symptoms failed. All patients undergoing reoperation underwent a laparoscopic approach, regardless of the approach used in the initial surgery. The technique we used to perform laparoscopic complete or partial fundoplication has been previously described in detail elsewhere.
18
Gastroesophageal reflux disease.
in: Cameron J.L. Current surgical therapy. Mosby, Philadelphia1995: 25-33
All fundoplications were taken down and dissected free of the surrounding tissues. The short gastric vessels were routinely divided if this had not been done at the original surgery. Mediastinal dissection of the esophagus was performed in order to mobilize at least 3 cm of intra-abdominal esophagus. The hiatus was closed posterior to the esophagus with interrupted, nonabsorbable sutures. The fundic wrap was then recreated as either a floppy complete fundoplication (Nissen) or as a posterior 270° fundoplication (Toupet) around a 56F to 60F bougie. The wrap was secured to the hiatus with nonabsorbable sutures.
Symptoms such as heartburn, dysphagia, and gas bloat were evaluated before and after reoperation with the application of a visual analog scoring scale from 0 to 10 in severity: 0, no symptoms, to 10, severe symptoms. Sense of well-being (0, poor, to 10, great) and level of activity (0, sedentary, to 10, very active) were assessed with similar 10-point scales. We are currently conducting a prospective study to validate these scoring scales. Fifty of 54 patients (93%) had complete preoperative and postoperative questionnaires. The mean patient follow-up time was 22.5 months (range 0.8-57.2 months). Only 7 patients had follow-up less than 6 months. Patients were evaluated with symptom scores before the operation and at each postoperative visit. Symptom scores from the latest follow-up visit were considered for each patient.
A 2-tailed paired Student t test was used for comparison of preoperative and postoperative scores. A Fisher exact test was used for differences in proportions (InStat version 3.01; GraphPad Software, Inc, San Diego, Calif).

A total of 54 patients underwent laparoscopic attempted reoperation for failed fundoplication. Mean patient age was 47.1 years (range 24-80 years). The male to female ratio was 1:1.3. Median time from the initial to the repeat procedure was 12.5 months (range 2-185 months, mean 26.9 months). Thirty-three patients (61%) underwent reoperative fundoplication within a year from the initial fundoplications, and 46 (85%) did so within 2 years. The primary symptoms prompting operation were heartburn in 26 cases (48%), dysphagia in 23 cases (43%), and gas bloat in 5 cases (9%).
Twenty-three patients (43%) underwent one or more esophageal dilations for dysphagia (mean 1.5, range 1-5). Preoperative barium esophagram revealed free reflux of contrast (n = 22), deformity of fundoplication (n = 21), tight fundoplication (n = 7), possible achalasia (n = 1), and no abnormal findings (n = 12). Preoperative EGD revealed esophagitis (n = 17), Barrett esophagus (n = 9), hiatal hernia (n = 17), deformity of fundic wrap (n = 7), tight fundoplication (n = 7), and no abnormal findings (n = 17). Seventeen of the 34 patients who underwent manometric evaluation had poor esophageal motility diagnosed. Fifteen of the 32 patients who underwent evaluation with 24-hour pH study had an abnormal DeMeester score.
The type of reoperative fundoplication in relation to the initial operation is depicted in Table 1. Three of 54 patients (5.6%) had conversion to open procedures because of extensive scarring around the gastroesophageal junction. All 3 patients had initially undergone open procedures. Five patients who had undergone an open primary operation were able to have laparoscopic reoperations. The mean operative time for reoperation was 180 ± 22 minutes (range 60-355 minutes). The average hospital stay was 2.3 ± 1.6 days (range 1-8 days).
TABLE 1Type of reoperative antireflux procedure
Patients were carefully assessed at the time of operation for the cause of the fundoplication failure. A slipped or misplaced fundoplication was found in 26% of patients, followed in frequency by a disrupted fundoplication (15%) and a transdiaphragmatic herniation of the fundoplication (13%; Table 2). Half of the patients with a slipped or misplaced fundoplication were patients referred to us from other institutions. Seventeen of the 54 patients (31%) had no obvious reasons for failure noted at the time of reoperation; 8 of 17 patients with recalcitrant dysphagia or gas bloat underwent conversion of a complete fundoplication to a partial fundoplication, and 9 of 17 patients with recalcitrant heartburn documented by 24-hour pH study or EGD underwent repeat fundoplication (Nissen to reoperative Nissen n = 4, Toupet to Nissen n = 3, and Nissen to Toupet n = 2, these patients were found to have a loose fundoplication and underwent a partial wrap because of preoperative abnormal esophageal motility).
TABLE 2Intraoperative anatomic findings
* All confirmed radiologically.
There were no perioperative deaths in our series. Fourteen patients (18%) had 15 perioperative complications (Table 3). Seven patients had a laceration of the gastric fundus during dissection of the old fundoplication. The injury was recognized in all cases and repaired intraoperatively with suturing or application of an endoscopic stapling device. One patient with unrecognized esophageal injury had a contained leak that was treated conservatively. An esophageal swallow study on postoperative day 7 revealed resolution of the leak, and the patient was discharged without further complications.
TABLE 3Perioperative complications
Three patients (5.6%) had failure of the reoperation and eventually underwent subsequent operations. One patient with two previous failed Nissen fundoplications ultimately underwent a Collis gastroplasty for esophageal lengthening to address short esophagus. Another patient with morbid obesity and steroid-dependent asthma related to GERD had undergone two fundoplications without resolution of her symptoms and ultimately required a Roux-en-Y gastric bypass procedure. The third patient had undergone a Belsey Mark IV and two failed laparoscopic Nissen fundoplications. This patient reported persistent dysphagia, and esophageal manometry revealed aperistalsis of the entire esophagus. The patient underwent a transhiatal esophagectomy for end-stage reflux disease. All 3 patients are now free of reflux symptoms after their final procedure.
Reoperative fundoplication was successful in alleviating the primary complaint in most cases. Postoperative mean visual analog scores decreased significantly for heartburn (from 7.8 to 3.4, P < .0001), dysphagia (from 6.4 to 3.7; P < .005), and gas bloat (from 8.6 to 4.9; P < .005; Figure 2). Eighty-two percent of our patients had some improvement in the visual analog score of the primary symptom that led to reoperation. A significant percentage of patients (40%-50%) had resolution of the primary symptom (score <3), and a large percentage of patients (21%-45%) had only moderate postoperative symptoms (score 3-7; Figure 3). Among the 17 patients without identifiable intraoperative reason for the failure of the fundoplication, 12 patients had improvement in the visual analog score of the primary symptom. Quality of life scores increased from 5.5 to 7.2 (P < .001) after surgery, and activity scores increased from 6.7 to 7.8 (P < .01). For further assessment of patient satisfaction, patients were asked whether they would make the same decision and undergo a reoperative fundoplication; 70% of patients replied that they would.
Data regarding preoperative and postoperative medication use was available in 33 of 54 cases (Figure 4). Seventeen of 33 patients (52%) were free of any medical treatment for GERD (antacids, histamine blockers, and proton-pump inhibitors) after a mean follow-up of 26 months. The reasons for GERD medication use in the remaining 16 patients were peptic ulcer disease (n = 2), dyspepsia (n = 1), and heartburn (n = 13).

Laparoscopic reoperation is a feasible and relatively safe option for the treatment of failed fundoplication. Symptomatic relief is achieved in a large percentage of patients; however, patient satisfaction is much lower than with a primarily successful fundoplication. Prevention of fundoplication failure with proper patient selection and surgical technique should be the goal in achieving the best results.

☆Supported in part by a research grant from Tyco Healthcare.

© 2004 The American Association for Thoracic Surgery. Published by Elsevier Inc. All rights reserved.