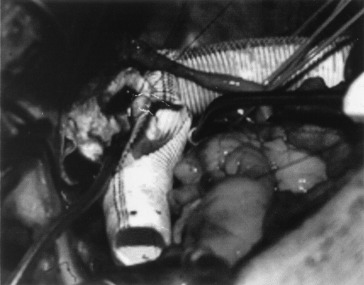 The clamshell approach for the treatment of extensive thoracic aortic disease

Management of extensive thoracic aortic disease may present an immense technical challenge. The choice of surgical access and subsequent exposure determines whether a single-stage or a 2-stage approach can be adopted.

Fifteen patients with extensive thoracic aortic disease underwent resection of the ascending aorta, the aortic arch, and varying segments of the descending aorta. Four patients had concomitant coronary artery bypass grafting and 3 patients had aortic valve reconstruction. All patients were treated with a single-stage approach via a bilateral anterior thoracosternotomy (clamshell incision).

There was 1 hospital death (6.6%). Two patients required reoperation for bleeding (13.3%). Two patients needed mechanical ventilation for more than 48 hours. Three patients suffered a stroke (20%). Two patients (13.3%) had transient neurologic dysfunction. None of the patients had renal failure. There were no wound infections in this group.

The single-stage approach, via a clamshell incision, is a safe and effective procedure for patients who require treatment of extensive thoracic aortic disease and concomitant cardiac lesions.

The optimal surgical treatment of patients with extensive thoracic aortic disease involving the ascending aorta, aortic arch, and descending aorta is not clearly established. Some of these patients also require concomitant treatment of coronary artery or heart valve disease. Conventionally, a 2-stage approach is adopted to gain access to all parts of the thoracic aorta and cardiac structures. This, however, exposes the patient to the risk of 2 major procedures. The elephant trunk technique is a means to facilitate the second surgical procedure; nevertheless, associated mortality for both stages still remains high, and especially ruptures in the interval between the stages represent an avoidable additional risk.
1
Staged repair of extensive aortic aneurysm improved neurologic outcome.
Ann Surg. 1997; 226: 599-605
Alternatively, a single-stage approach via transverse thoracosternotomy (clamshell incision) can be performed.
We present our experiences with a single-stage repair of extensive thoracic aortic disease, using the clamshell incision.

Between January 1998 and May 2000, 15 patients with extensive thoracic aortic disease were treated at our institution via a clamshell incision in a single-stage approach. The mean age of these patients was 66.5 ± 7.6 years. There were 7 men and 8 women. Nine patients underwent replacement of the entire thoracic aorta; 3 patients had replacement of the ascending aorta and aortic arch; 3 patients had replacement of the aortic arch and descending thoracic aorta.
The underlying pathology was atherosclerotic aortic aneurysm in 13 cases with a diameter greater 5.5 cm, type B dissection in 1 case, and type A dissection with a thrombosed false lumen extending into the descending aorta in 2 cases. Four patients had concomitant coronary artery disease requiring myocardial revascularization. Another 3 patients had additional aortic valve disease that was treated by aortic valve reconstruction.
The indications for operation were progressive enlargement of the involved aortic segment, documented by computed tomography or magnetic resonance imaging in all patients, and the presence of symptoms. All elective patients had preoperative cardiac catheterization and echocardiography. A demographic survey of all patients’ concomitant comorbidities is provided in Table 1.
TABLE 1Concomitant diseases of patients undergoing clamshell incision

Surgical access to the chest was gained through a bilateral anterior thoracotomy and transverse sternotomy in the fourth or fifth intercostal space (Figure 1). The incision was extended from the medioclavicular line on the right to the anterior axillary line on the left. The internal thoracic arteries were both ligated or dissected when needed. Then the heart and the entire thoracic aorta were exposed and dissected. To establish cardiopulmonary bypass, the right subclavian artery (n = 9), the femoral artery (n = 2), or direct cannulation (n = 4) of the aortic arch was used for arterial return, and the right atrial appendage was cannulated for venous return. During circulatory arrest, retrograde cerebral perfusion (n = 3), at 18°C rectal temperature, and antegrade cerebral perfusion (n = 12), at 22°C rectal temperature, were applied.
For patients who had concomitant coronary artery bypass grafting, exposure of the 3 major arterial systems was possible by widely incising the pericardium. The left internal thoracic artery was dissected when needed. The aortic root was also accessible, if aortic valve reconstruction was indicated.
The clamshell approach was chosen in patients in whom the underlying pathology would conventionally require a staged repair via 2 separate incisions, or technical difficulties at the distal arch anastomoses due to sclerosis or dissection were anticipated. With increasing experience, we employed this technique for patients in whom we anticipated technical problems in exposure via a median sternotomy.
Indications for the clamshell incision were an aortic aneurysm of the complete thoracic aorta; a combination of aortic aneurysms of the complete aortic arch and the ascending or descending aorta; severely diseased other segments; a combination of aortic aneurysms of the complete aortic arch or descending aorta; and coronary heart disease or aortic valve disease. Further indications were a combination of an acute type A dissection with an entry tear in the descending aorta and coronary heart disease; a type A dissection extending into the descending thoracic aorta with a thrombosed false lumen in the aortic arch; a combination of a type B dissection and an ascending aortic aneurysm; a distal arch aneurysm with left lateral dislodgement of the proximal descending aorta; and dilatation of the proximal descending or ascending aorta in the presence of severe sclerosis combined with a descending aortic aneurysm.

In all cases, we obtained good exposure of the chest cavity, which enabled us to successfully treat all pathologies of the entire thoracic aorta and concomitant cardiac lesions in 1 session. The mean bypass time was 191 ± 51 minutes and the mean crossclamping time was 90 ± 41 minutes. Mean circulatory arrest or low flow time was 26 ± 17.5 minutes.

Two patients (13.3%) required reexploration for bleeding. In all cases, the hemorrhages were easily controllable. The mean postoperative blood loss, via chest tubes, was 1250 ± 506 mL. All patients were weaned from mechanical ventilation. Two patients with preexisting respiratory insufficiency were ventilated for more than 48 hours. None required tracheotomy.
The mean intensive care unit stay was 7.5 days. None of the patients developed renal failure requiring temporary hemofiltration or hemodialysis. There were no cases of left recurrent laryngeal nerve injury.
A total of 5 patients had neurologic dysfunctions postoperatively. Three patients (20%) had a stroke, 1 early on postoperative day 9 and 2 late postoperatively. Transient neurologic dysfunction occurred in 2 patients (13.3%) and resolved completely before discharge. None of the patients had evidence of spinal cord ischemic injury.
There were no deep wound infections, and postoperative pain was controlled by oral analgesics. The mean duration of postoperative hospital stay was 23 ± 14 days.

There was 1 hospital death (6.6%). This patient had undergone replacement of the ascending aorta, aortic arch, and descending thoracic aorta. After an initial uneventful postoperative course that included extubation, she had a stroke and died on postoperative day 9. A computed tomography scan was performed that showed signs of cerebral edema and brain stem infarction. There were no signs of intracranial hemorrhage.

The clamshell incision has been used widely for the performance of bilateral lung transplantation.
2
Technique and results of double lung transplantation.
Chest Surg Clin North Am. 1993; 3: 89-111
This approach provides excellent exposure of the entire thoracic aorta, venae cavae, the heart, and both pleural spaces. We have adopted this technique in our effort to treat patients with extended thoracic aortic disease and patients requiring replacement of the descending thoracic aorta and concomitant cardiac surgery, in 1 session.
We feel that the conventional 2-stage approach bears a number of disadvantages. It is used because a median sternotomy does not allow for adequate exposure of the descending thoracic aorta and distal arch. Therefore, surgeons are forced to make a number of compromises, such as a second painful incision, dissection through dense adhesions from the previous procedure, application of an aortic clamp near the proximal anastomotic site with the increased risk of bleeding, or repeated hypothermic circulatory arrest and repeated anesthesia.
The difficulties encountered at the distal suture line were addressed by introducing the elephant trunk technique, which allowed for technically easier graft-to-graft anastomoses. Therefore, the second stage of the operation was facilitated. However, the interval between the stages remains a cause of concern, as recent literature suggests that there is a mortality of 10% in this period among patients on the waiting list.
1
Staged repair of extensive aortic aneurysm improved neurologic outcome.
Ann Surg. 1997; 226: 599-605
,
3
Staged repair of extensive aortic aneurysms.
Circulation. 2001; 104: 2938-2946
The need for a second operation brings the avoidable risk of 2 major procedures. For instance, staged replacement of the entire thoracic aorta is associated with a mortality rate of 7% to 16%, a neurologic sequelae rate of 9% to 60%, respiratory insufficiency rate of 32%, and a renal failure rate of 10%, per session.
4
Replacement of the entire thoracic aorta in a single stage.
Ann Thorac Surg. 1994; 57: 850-855
For stage 2 alone, Safi and colleagues
1
Staged repair of extensive aortic aneurysm improved neurologic outcome.
Ann Surg. 1997; 226: 599-605
describe an additional incidence of pulmonary complications in 32%, renal insufficiency in 16%, cardiac complications in 29%, and encephalopathy in 6% of their patients. Furthermore, the need for repeated general anesthesia, a second extracorporeal circulation, and circulatory arrest have to be considered.
The foremost advantage of the clamshell incision is that its superior exposure of all relevant thoracic structures enables surgeons to treat complex thoracic diseases in 1 session, thereby avoiding the additional perioperative mortality and morbidity of a second procedure. Our encouraging experiences in the treatment of extensive aortic disease in pediatric cases via this incision prompted us to employ this technique in concomitant complex cardiac and aortic lesions. In all of these cases, excellent exposition of the cardiac structures and thoracic aorta was obtained, enabling us to treat these children in 1 session.
5
Complete repair of PA-VSD with diminutive or discontinuous pulmonary arteries by transverse thoracotomy.
Ann Thorac Surg. 1996; 61: 646-650
The transverse thoracotomy is a single symmetric incision, giving a good cosmetic result with 2 incisions and a good quality of life. Although it causes more pain than a median sternotomy, it is certainly better tolerated than a poster lateral thoracotomy.
6
Single-stage replacement of the entire thoracic aorta via transverse thoracosternotomy.
South Med J. 1996; 89: 348-352
Women especially benefit from this incision, as the scar is partially hidden by the breasts; multiple chest scars and the occurrence of breast asymmetry are avoided.
7

A number of disadvantages of the clamshell incision have been described. The incision requires the ligation of both internal thoracic arteries, which is a downside of the procedure. Griepp and Ergin
8

Two of our patients needed reexploration for bleeding. This rate is comparable to reexploration rates for single replacement of the descending thoracic aorta via poster lateral thoracotomy.
9
Surgical treatment of aneurysms of the thoracic aorta with the aid of partial cardiopulmonary bypass an analysis of 95 patients.
Ann Thorac Surg. 1987; 43: 662-667
Our results are similar to the findings of Kouchoukos and colleagues,
10
Single-stage reoperative repair of chronic type A aortic dissection by means of the arch-first technique.
J Thorac Cardiovasc Surg. 2001; 122: 578-582
who describe a low mortality rate, no respiratory insufficiency, and a low reoperation rate for bleeding in their experience with the clamshell incision. Our in-hospital mortality of 6.6% shows that the approach alone does not necessarily explain the high rates of mortality described by other authors for this technique.
6
Single-stage replacement of the entire thoracic aorta via transverse thoracosternotomy.
South Med J. 1996; 89: 348-352
,
8

In conclusion, we would like to state that the clamshell incision gives superior exposure of the entire thoracic aorta and the heart. Thus, extended aortic replacement and combined cardiac procedures can be performed safely, in a single-stage approach. Our encouraging results from using this technique need to be confirmed by larger series.

© 2003 The American Association for Thoracic Surgery. Published by Elsevier Inc.