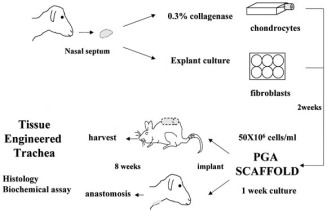 The specimens for histology were fixed in 10% phosphate-buffered formation, embedded in paraffin, and sectioned. Sections were stained with hematoxylin-and-eosin (H&E) and Safranin-O.

Biochemical analysis was performed on harvested tissue to quantify the level of cartilage-specific extracellular matrix components. Samples were digested by means of the addition of 1.0 mL of 100 mmol/L sodium phosphate, 10 mmol/L sodium EDTA, 10 mmol/L cysteine hydrochloride (Sigma), 5 mmol/L EDTA (BDH), and 125 μg/mL papain (Sigma). The samples were incubated at 60°C for 24 hours and stored at −20°C. The sulfated glycosaminoglycan (GAG) content of digests was quantified by means of previously described methods.
10
Quantification of sulfated glycosaminoglycans in chondrocyte/alginate cultures, by use of 1,9-dimethylmethylene blue.
Anal Biochem. 1996; 243: 189-191
In brief, 10 μL of papain digest was added to 200 μL of 1,9-dimethylmethylene blue dye at pH 3.0, with absorbencies detected at 525 nm with a spectrophotometer immediately after the addition of the dye. The GAG content of the samples was determined by using a C-6-S from shark cartilage (Sigma) as a standard. The hydroxyproline contents of digests were determined by using the procedure of Stegemann and Stalder.
11
Determination of hydroxyproline.
Clin Chim Acta. 1967; 18: 267-273
In brief, the papain digests were hydrolyzed with equal volumes of 6N HCL in 115°C for 16 to 24 hours. Chloramine T and p-dimethylamino-benzaldehyde were added to hydrolyzed samples, and absorbances were detected at 560 nm with a spectrophotometer immediately after the addition of the dye. The DNA content of samples was determined by quantitating the fluorescence (358/458 nm) of aliquots immediately after mixing with bisbenzimidazole dye (Hoechst 33258) with a fluorimeter.
12
Fluorometric assay of DNA in cartilage explants using Hoechst 33258.
Anal Biochem. 1988; 174: 168-176

A variety of materials have been used in tracheal prostheses, such as various inert materials alone
5
Reconstruction of the trachea and stem bronchi with Neville prosthesis.
Int Surg. 1982; 67: 229-234
,
6
Experimental study of a new tracheal prosthesis made from collagen-grafted mesh.
ASAIO Trans. 1991; 37: M317-M319
or in combination with autologous tissue,
7
The first step of experimental study on hybrid trachea: use of cultured fibroblasts with artificial matrix.
J Cardiovasc Surg (Torino). 1994; 35: 165-168
,
13
Prefabricated jejunal free-tissue transfer for tracheal reconstruction: an experimental study.
Plast Reconstr Surg. 1996; 98: 1046-1051
but none of them has been effective. There is, however, a general agreement that autologous tissues are the first choice in reconstructive surgery, particularly in tracheal surgery. Several reports have described experimental tracheal reconstruction with autotransplants, but none of them has proven to be satisfactory for human use. However, this procedure is complicated by the need for long-term immunosuppressant therapy and a lack of sufficient donor tissue. Akl and colleagues
14
A new method of tracheal reconstruction.
Ann Thorac Surg. 1983; 36: 265-269
and Osada and Kojima
15
Experimental tracheal reconstruction with a rotated right stem bronchus.
Ann Thorac Surg. 2000; 70: 1886-1890
reported experimental reconstruction of a tracheal defect longer than 10 cm using a rotated main bronchus. The major drawback of this method is loss of part of the lung, and the method is also unable to be used for high mediastinal tracheal defects. Cavadas
1
Tracheal reconstruction using a free jejunal flap with cartilage skeleton: experimental study.
Plast Reconstr Surg. 1998; 101: 937-942
created a suitable native trachea, which is composed of an autologous microvascular jejunal transfer with a cartilage skeleton for major tracheal reconstruction. This method is ideal but is complicated by the need for a tracheal stent and the need for a 10- to 15-cm jejunum with its vessels.
The goal of our study was to create a completely autologous TET structure composed of a cartilaginous framework with connective tissue by using tissue harvested from a single procedure. This has the potential benefit of facilitating an autologous approach for repair of segmental defects. Gross morphology showed that the rat TET was similar to the native trachea and had excellent flexibility.
In contrast, sheep TETs were much less stiff and collapsed quite easily. This is consistent with the tracheomalacia observed in animals after anastomosis. The difference in stiffness between the rat TET and the sheep TET was reflected in the biochemical analysis of these tissues. Sheep TETs had a much lower GAG content than rat TETs. GAG and hydroxyproline are reflective of proteoglycan and collagen levels in these tissues. The presence of GAG in the neomatrix provides quantitative evidence of extracellular matrix production by chondrocytes seeded onto PGA. Because proteoglycans are the major structural component of the cartilage extracellular matrix responsible for tissue stiffness,
16
Streaming potentials: a sensitive index of enzymatic degradation in articular cartilage.
J Orthop Res. 1987; 5: 497-508
it is logical that the sheep TET should be less stiff as well. The mechanism behind the decreased proteoglycan content in sheep TETs is not clear, but it likely involves the inflammatory response to the implant. PGA is known to elicit a strong inflammatory response that can inhibit the formation of tissue-engineered cartilage.
17
Comparative study of the use of poly(glycolic acid), calcium alginate and pluronics in the engineering of autologous porcine cartilage.
J Biomater Sci Polym Ed. 1998; 9: 475-487
This response is likely to involve inflammatory mediators, such as interleukin 1 (IL-1). IL-1 specifically is known to induce a degradation of cartilage that results in significant loss of tissue mechanical function.
18
Inhibition of cartilage degradation and changes in physical properties induced by IL-1beta and retinoic acid using matrix metalloproteinase inhibitors.
Arch Biochem Biophys. 1997; 344: 404-412
This process is thought to be mediated by the IL-1-induced production of degradative enzyme that is known to alter the mechanical properties of cartilage.
19
Activation and inhibition of endogenous matrix metalloproteinases in articular cartilage: effects on composition and biophysical properties.
Arch Biochem Biophys. 1996; 333: 359-367
Greater understanding of this process would aid in the analysis and design of polymer-based tissue-engineered implants, as well as in the understanding of inflammatory-based diseases of the trachea.
In future studies we intend to construct and use a larger diameter template for the helical portion of the implant. This will compensate for the animal growth that occurs between the initial implantation and anastomosis and should prevent short-term stenosis after surgical intervention. We will also investigate the use of alternative materials as scaffolds for cartilage growth, such as alginate and pluronic. These materials have been shown to be favorable for cartilage growth in autologous models. Furthermore, we plan to maintain the vascular supply to the implant after anastomosis by preserving the surrounding muscle pedicle.

We thank Steve Carr, Carol Lovewell, and Gwenn Gaumon for their expert technical assistance and for preparation of the experiment.

☆This study was funded by the University of Massachusetts Medical School and Worcester Foundation for Biomedical Research.