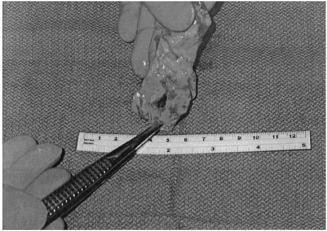 Records of a total of 45 patients, 26 patients with penetrating ulcers and 19 patients with intramural hematomas, were retrospectively reviewed from the database of the Yale Center for Thoracic Aortic Disease. These records were identified from among those of 360 patients treated for acute dissecting-type diseases. The study patients constituted a subset of this group with acute presentation, and lesions found incidentally were not included in this study.
The follow-up consisted of chart review, examination of the computerized radiologic database, telephone calls, and Internet (Social Security Death Index) and medical record mortality review. The chart review involved collection of data regarding presentation, initial symptoms, radiologic studies, interventions (if any), in-hospital mortality, and subsequent course. The radiologic review involved systematic reexamination of all Yale and outside patient films, at presentation and subsequent, by a single vascular radiologist (P.E.C.) and a single cardiothoracic surgeon (J.A.E.). The clinical and radiographic criteria used to diagnose the diseases were as follows:
The definitions of disease healing, progression to dissection, worsening and rupture were as follows:
Follow-up was 100% complete.

General approach to these lesions

Our general policy, which was based on our early experience and the available literature, was to operate on all ascending penetrating ulcers and hematomas and to treat those in the descending aorta with standard anti-impulse therapy, with a low threshold for surgical intervention in cases of recurrent clinical symptoms or radiographic progression. Patients who were not operative candidates for general reasons (age, comorbidities, patient preference) were excluded from this general paradigm.

Twenty-six patients with penetrating ulcers were studied. The average age of the patients was 72 years (range 54-85 years), and 62% were female. Of the 26 patients, 10 (38%) had rupture at admission. Seventeen patients (67%) were operated on. Twenty-two patients (87%) survived to discharge. The 38% incidence of rupture at presentation among these patients was significantly higher than that among our registry data for patients with typical aortic dissections, who had rupture rates of 8% and 4% for type A and B dissections, respectively (P <.01). The lesion was present in the ascending aorta in 12 patients (46%) and in the descending aorta in 14 (54%). Eleven patients (42%) had no imaging follow-up of the penetrating ulcer. Of those patients, 6 underwent surgery, 2 died, and 3 had only the initial imaging study performed. Fifteen patients (58%) had follow-up imaging. Of these, 4 (27%) had no change, 4 (27%) had worsening (Figure 3), and 7 (46%) had progression to frank dissection.The mean interval to detection of progression to frank dissection was 12.0 months (range 0.1-50.8 months). Seventy-three percent showed worsening in one form or another, and the remainder showed no change. This type of lesion did not resolve. The aortas in these patients grew at the rate of 0.2 cm/y. Mean aortic size was 4.8 cm at presentation and 5.1 cm at latest follow-up (mean 18.2 months). Average follow-up for these patients was 3.4 years (4.1 years, excluding those with in-hospital deaths), with a range of 0.1 to 12.5 years for patients who survived hospitalization.
Seven patients with penetrating ulcers died during late follow-up. One patient (14%) died of documented rupture. This was a surgical patient who had rupture of a nonreplaced segment of the abdominal aorta. Other causes of death were myocardial infarction (n = 2, 29%), cerebrovascular accident (n = 1, 14%), chronic obstructive pulmonary disease (n = 1, 14%), and unspecified noncardiovascular cause (n = 2, 29%).

Nineteen patients with intramural hematomas were studied. The average age of the patients was 74 years (range 54-88 years), and 58% were female. Of the 19 patients, 5 (26%) had rupture at admission. Seven patients (37%) were operated on. Sixteen patients (84%) survived to discharge. Incidence of early rupture among these patients was 26%, compared with 8% and 4% for type A and B dissections, respectively (P <.01). The lesion was present in the ascending aorta in 11 patients (58%) and in the descending aorta in 8 (42%). Eight patients (42%) had no imaging follow-up of the intramural hematoma. Of those patients, 4 underwent surgery, 3 died, and 1 had only the initial imaging study performed. Eleven patients (58%) had follow-up imaging. Of these, 5 (46%) had healing, 1 (9%) had no change, 2 (18%) had worsening (Figure 4), and 3 (27%) had progression to frank dissection.Fifty-four percent showed either worsening or no change, and 46% showed healing. The aortas in these patients grew at the rate of 0.4 cm/y. Mean aortic size was 5.3 cm at presentation and 5.8 cm at latest follow-up (mean 15.6 months). Average follow-up in these patients was 3.4 years (4.0 years, excluding those with in-hospital deaths), with a range of 0.3 to 9.3 years for patients who survived hospitalization.
Eight patients with intramural hematomas died during late follow-up. Five deaths (63%) were due to documented rupture. Other causes of late death were myocardial infarction (n = 1, 12%), pneumonia (n = 1, 12%), and unspecified noncardiovascular cause (n = 1, 12%).

Behavior of the whole cohort

A total of 45 patients were studied (Table 1).
Table 1Characteristics of penetrating ulcers and intramural hematomas according to anatomic location
The average age of the patients was 73 years (range 54-88 years), and 60% were female. This female preponderance was significantly different from the sex distribution in our overall dissection registry, in which only 38% of patients were female (P <.01). Of the 45 patients, 15 (33%) had rupture at admission. Twenty-four patients (53%) were operated on. Eighty-three percent of penetrating ulcers in the ascending aorta required operation, and 50% in the descending aorta required operation. Forty-five percent of intramural hematomas in the ascending aorta required operation, and 25% in the descending aorta required operation. All operations were urgent or emergency. Twenty of 24 patients (83%) survived after operation to discharge. By comparison, 18 of 21 nonoperatively treated patients (86%) survived to discharge. In total, 38 patients (84%) survived to hospital discharge. Nineteen patients (42%) had no imaging follow-up of the lesion. Of those patients, 10 underwent surgery, 5 died, and 4 had only the initial imaging study performed. Twenty-six patients (58%) had follow-up imaging. This represents 87% of those patients still living who did not have the lesion excised surgically. Of these, 5 had healing, 5 had no change, 6 had worsening, and 10 had progression to frank dissection. Average follow-up of these patients was 3.4 years (4.1 years, excluding those with in-hospital deaths), with a range of 0.1 to 12.5 years for patients who survived hospitalization.

The slope of the mortality curve decreased abruptly once the initial phase of presentation was surpassed (Figure 5, A).Penetrating ulcer and intramural hematoma had similar outlooks. Surgical intervention appeared to produce a survival similar to or exceeding that of the less severely ill medically treated patients, at least for intramural hematoma (Figure 5, B and C). Strict comparison is not feasible, because surgical bias may have selected patients at better risk from among these elderly patients with abundant comorbidities. Overall survivals were 80% at 1 year, 73% at 3 years, and 66% at 5 years.

During the past 20 years, the diagnoses of penetrating ulcer and intramural hematoma of the aorta have become better recognized and more distinct from the larger universe of typical dissection. Unique pathophysiologic characteristics and natural history are being elucidated. Specifically, these entities appear to occur without the intimal flap that accompanies classic aortic dissection. Care must be taken to differentiate these two diseases from dissection, because both short- and long-term courses appear to involve considerable risk of early rupture and concomitant late death.
Although this is one of the larger series in terms of patient numbers, with 45 initial patients, there was attrition before natural history follow-up as a result of mortality and selection for operation. The observations regarding presenting pathologic characteristics and early lesion behavior are based on the total group. Those regarding imaging follow-up were based on a subgroup of 26 patients. Thus observations and recommendations must be considered provisory, as worldwide experience with these entities accumulates.
Previous case series
7
Diagnosis and treatment of thoracic aortic intramural hematoma.
J Vasc Surg. 1996; 24: 1022-1029
,
8
Transesophageal echocardiographic and clinical features of aortic intramural hematoma.
J Thorac Cardiovasc Surg. 1997; 114: 619-626
,
9
Natural history and serial morphology of aortic intramural hematoma: a novel variant of aortic dissection.
Am Heart J. 1997; 134: 495-507
,
10
Intramural hematoma of the thoracic aorta in octogenarians: is non operation justified?.
Eur J Cardiothor Surg. 1999; 16: 414-417
,
11
Prediction of progression or regression of type A aortic intramural hematoma by computed tomography.
Circulation. 1999; 100: II281-II286
,
12
Management of patients with intramural hematoma of the thoracic aorta.
Circulation. 1993; 88: II1-II10
,
13
Spontaneous progression of ascending aorta intramural hematoma to Stanford type A dissection fortuitously witnessed during an MR examination.
J Comput Assist Tomogr. 1999; 23: 966-968
have included mean follow-up times of 37 days to 29 months. This report extends the follow-up of penetrating ulcer and intramural hematoma to a mean follow-up of 41 months (49 months, excluding in-hospital deaths). This permits observations about the midterm sequelae of these aortic lesions.
The female preponderance seen in this series is in marked contradistinction to the sex distribution among our patients with typical dissections, who were 62% male and 38% female. This preponderance is at odds with patterns of most cardiovascular diseases. The reasons that women were more frequently affected are unknown. Also, this study indicates that penetrating ulcer and intramural hematoma are diseases of advanced age (mean 72 and 74 years, respectively).
A high incidence of rupture at initial presentation of penetrating ulcer (38%) and intramural hematoma (26%) was once again confirmed in this study. This rate was significantly higher than that among our patients with typical type A and type B dissections, who had rupture at the rates of 8% and 4%, respectively. This confirms that penetrating ulcers and intramural hematomas are serious lesions. It is clear that a low threshold for surgical intervention should be maintained.
It is interesting that no branch vascular occlusion occurred in any patients in this series. This is reflective of the fact that there is no flap and no false lumen in these conditions.
We had expected that penetrating ulcers would be less likely to progress to dissection in the long-term, because of the protection afforded by the local atherosclerosis, but this was not the case. Nearly half of these lesions progressed to typical dissection during longitudinal follow-up.
Our key observations on the basis of these follow-up data are as follows:Despite the advanced age and clinical instability of these patients and the fact that many operations were performed on an emergency basis, nearly 9 in 10 patients survived operation. Operation precluded later rupture or worsening of the lesion. One could argue that aggressive aortic replacement might subject to operation patients with intramural hematomas that might heal spontaneously, but this consideration is far offset by the 5 documented late ruptures of intramural hematomas. Robbins et al
12
Management of patients with intramural hematoma of the thoracic aorta.
Circulation. 1993; 88: II1-II10
recommended early surgical therapy for ascending aorta intramural hematoma; we have expanded our recommendations to all acutely presenting intramural hematomas because of the high propensity toward late rupture. We have not been able to identify presenting characteristics that can predict a stable radiographic or clinical course.
It is possible that catheter-based intra-aortic stent therapy may play a role in future management of these lesions. In favor of such an approach is the fact that these lesions are often limited in longitudinal extent and thus are amenable to stenting. On the other hand, these acute lesions result in a tenuous restraint of the bloodstream by only a fraction of the thickness of the aortic wall, and the trauma of the large catheters needed for stenting may pose a significant danger of rupture. Also, even with local control by stent, additional ulcers and hematomas may produce future rupture. Finally, the highly variable clinical courses of the natural disease processes will make assessment of true benefit from stenting difficult. Large numbers of patients and long follow-up times will be required. Although biologic glues have been suggested for the treatment of intramural hematomas, clinical experience is lacking. If a thoracotomy is necessary for delivery of glues, aortic resection may provide more definitive correction. As experience accumulates, understanding of the behavior of these disorders can progress from midterm to long-term courses.