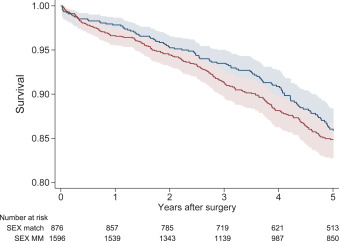 To examine the mortality risk of blood transfusions when donor information, postdonation treatment, and a wide selection of risk factors are taken into account.

A retrospective study was performed on 9907 patients who underwent coronary artery bypass grafting and/or aortic valve replacement. Several transfusion-related risk factors, including age of blood products, sex of donor, ABO group, Rh group, posttransfusion treatment, and sex matching, were included in the analysis. A wide selection of preoperative comorbidities were included as well. A Cox proportional hazards analysis was performed to determine significant risk factors. Patients were followed for a period of up to 12 years posttransfusion.

In this large retrospective study, transfusion of non–sex-matched RBCs was associated with increased mortality. In addition, in patients receiving small amounts of blood, leukocyte depletion of RBCs had a beneficial effect on patient survival.

AVR (aortic valve replacement), CABG (coronary artery bypass grafting), CI (confidence interval), COPD (chronic obstructive pulmonary disease), CRP (C-reactive protein), eGFR (estimated glomerular filtration rate), HR (hazard ratio), ICU (intensive care unit), RBC (red blood cell)
Central Message
Transfusion of red blood cells does not impact survival as long as sex-mismatched blood and non–leukocyte-depleted blood are avoided.
Perspective
Recent randomized trials have shown that a liberal transfusion threshold, or transfusion of older blood, does not have a negative impact on short-term survival. The long-term risks of transfusion are still being debated, however. The present study tries to shed some more light on this area.
See Editorial Commentary page 233.
See Editorial page 18.
Transfusion of blood products has been associated with increased short- and long-term mortality after cardiac surgery. Suggested risk factors include transfusion of packed red blood cells (RBCs), transfusion of plasma, and the age of transfused RBCs.
1
Risks of packed red blood cell transfusion in patients undergoing cardiac surgery.
J Crit Care. 2012; 27: 737.e1-737.e9
,
2
The effect of plasma transfusion on morbidity and mortality: a systematic review and meta-analysis.
Transfusion. 2010; 50: 1370-1383
,
3
Risks associated with the transfusion of various blood products in aortic valve replacement.
Ann Thorac Surg. 2013; 96: 494-499
,
4
Duration of red-cell storage and complications after cardiac surgery.
N Engl J Med. 2008; 358: 1229-1239
Previous studies have focused on selected risk factors of transfusion, rather than addressing the heterogeneity of transfusion in their analysis. Each blood product has several properties that could potentially affect outcome. To date, mainly the age of RBCs and sex of the plasma donor have been investigated in detail. Factors such as ABO group, Rh profile, and sex of the RBC donor generally have been overlooked, as has the variation in postdonation treatment of blood. For instance, leukocyte depletion of RBCs and different methods of storing plasma all alter the properties of the blood product. All of these factors could have an adverse effect on the recipient.
Relevant comorbidities that can increase both the risk of transfusion and the risk of mortality have not been adequately considered, thereby missing the casual relationship between a preexisting condition and mortality and instead associating the transfusion with mortality. Although many studies have included renal function in their analyses, it has been mostly in the inexact form of serum creatinine level or a dichotomous variable.
5
Transfusion in coronary artery bypass grafting is associated with reduced long-term survival.
Ann Thorac Surg. 2006; 81: 1650-1657
,
6
Transfusion of blood during cardiac surgery is associated with higher long-term mortality in low-risk patients.
Eur J Cardiothorac Surg. 2012; 42: 114-120
Anemia and markers of inflammation, both markers for disease, generally have not been included.
Consequently, the aim of the present study was to examine the risk profile of transfusions in terms of long-term mortality when donor information, postdonation treatment of blood, and a broad selection of confounding risk factors are taken into account. By including a wide variety of risk factors, we wanted to avoid statistical confounding and covariation, which are risks when attempting to retrospectively address an outcome that is potentially associated with numerous overlapping independent variables.

This retrospective study included patients who underwent surgery at the Department of Cardiothoracic Surgery at Lund University Hospital between January 1, 2002, and December 31, 2012. Data were collected from 4 principal sources. Clinical data were retrieved from the in-house clinical database, in which relevant clinical perioperative information is collected during a patient's hospital stay. The databases of the hospital's clinical chemistry laboratory and blood bank served as the second and third sources of data. Data on time of death, but not on cause of death, were obtained from the Swedish Tax Agency, covering deaths up to December 2013, defining the follow-up period of 1 to 12 years. The study protocol was approved by the local Ethics Committee.

Completeness and Reliability of the Data

Preoperative characteristics and intraoperative information were entered into the in-house database by each surgeon (near 100% completion rate), and postoperative data had a completion rate of 88% to 100%. Information on deaths was obtained indirectly from the Swedish Tax Authority, which lacks data only in exceptional cases such as emigration and patients lost to follow-up. The emigration rate for all Swedes in this age category is approximately 0.1% per year.
7

Statistics Sweden. Migrations by region, age, gender and years [in Swedish]. Available at: www.scb.se. Accessed May 15, 2014.

Transfusion of blood products was defined as a transfusion during surgery or during the postoperative stay. Transfusion data were retrieved from the blood bank's quality-controlled database (deemed 100% accurate). Laboratory parameters were retrieved electronically from medical records. When data were missing or extreme outliers were identified, patient records were read in a first attempt to complete the data. After this, preoperative creatinine values were still missing for 214 patients, and thus these values were imputed based on the levels on the first postoperative day.
8
Blood transfusion after cardiac surgery: is it the patient or the transfusion that carries the risk?.
Acta Anaesthesiol Scand. 2011; 55: 952-961
Missing preoperative data for hemoglobin concentration (n = 208) and preoperative leukocyte count (n = 757) were imputed from mean values for the other cases. Missing preoperative C-reactive protein (CRP) values (n = 833) were imputed from the median value for the rest of the cases. For missing dichotomous variables, a mode value substitution was used.
Renal function was expressed as the estimated glomerular filtration rate (eGFR) and calculated according to the Chronic Kidney Disease Epidemiology Collaboration's formula.
9
A new equation to estimate glomerular filtration rate.
Ann Intern Med. 2009; 150: 604-612

Transfusion Practices During the Study Period

A Cox proportional hazards model was used to identify the factors affecting long-term survival. Primary model building was performed by a backward stepwise elimination procedure with the aforementioned variables (excluding variables with fewer than 30 valid observations) for the entire period (0-12 years). Variables with a P value <.05 were retained in the model together with the numbers of RBC, plasma, and platelets units regardless of their level of significance. The proportional hazards assumption was tested using scaled Schoenfeld residuals.
Once this model was created, the final model was designed by changing the continuous variable for number of transfusions to categorical variables (ie, 1-2 units, 3-4 units, and 5-7 units) if the continuous variable was significant. The final model was then used to determine factors predicting survival in 3 intervals: 0-12 years, 0-1 year, and 1-12 years. A post hoc analysis was performed when the statistical significance of suggested interaction from the different types of mismatch variables were tested in separate models, to avoid collinearity. In another post hoc analysis, all transfusion variables were forced in the final model to obtain effect estimates that were insignificant in the primary analysis. Kaplan-Meier curves were used to compare survival over time.
R version 2.13.0 with the survival package was used to test the proportional hazards assumption for a Cox regression model fit. All other statistical calculations were performed using Statistica version 12 (StatSoft, Tulsa, Okla).

The final model was used to study mortality up to 1 year, yielding complete observations for the entire study cohort (219 deaths). Among transfusion variables, transfusion of 1 to 2 units of non–leukocyte-depleted RBCs and transfusion of more than 7 units of fresh plasma were associated with a significant increase in the hazard ratio (HR).

One- to 12-Year Survival

The analysis of survival during postoperative years 1-12 revealed 1701 deaths among 9688 patients analyzed. Among the transfusion variables, transfusion of 5-7 units of leukocyte-depleted RBCs, sex-mismatched RBCs, and Rh-matched RBCs resulted in a significant increase in HR (Table 4).

Dr Algotsson reports lecture fees from Abbott. Dr Bjursten reports consulting fees from Boston Scientific. All other authors have nothing to disclose with regard to commercial support.

This research was made possible by Lund University Hospital funds.

Copyright © 2016 by The American Association for Thoracic Surgery